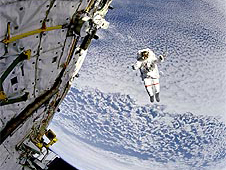 Mark Lee's spacesuit allowed him to fly away freely from the space shuttle during this test of the SAFER backpack. Image Credit: NASA
>  View Larger Image

What Is a Spacesuit?

A spacesuit is much more than a set of clothes astronauts wear on spacewalks. A fully equipped spacesuit is really a one-person spacecraft. The formal name for the spacesuit used on the space shuttle and International Space Station is the Extravehicular Mobility Unit, or EMU. "Extravehicular" means outside of the vehicle or spacecraft. "Mobility" means that the astronaut can move around in the suit. The spacesuit protects the astronaut from the dangers of being outside in space.

Why Do Astronauts Need Spacesuits? 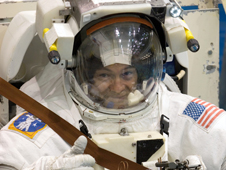 What Are the Parts of a Spacesuit?

Underneath the spacesuit, astronauts wear a Liquid Cooling and Ventilation Garment. Tubes are woven into this tight-fitting piece of clothing that covers the entire body except for the head, hands and feet. Water flows through these tubes to keep the astronaut cool during the spacewalk.

On the back of the spacesuit is a backpack called the Primary Life Support Subsystem. This backpack contains the oxygen that astronauts breathe during a spacewalk. It removes carbon dioxide that astronauts exhale. The backpack also provides electricity for the suit. A fan moves the oxygen through the spacesuit and life support systems, and a water tank holds the cooling water that flows through the Liquid Cooling and Ventilation Garment.

Also attached to the back of the suit is a device called the Simplified Aid for Extravehicular Activity Rescue, or SAFER. SAFER has several small thruster jets. If an astronaut became separated from the space station, he or she could use SAFER to fly back. 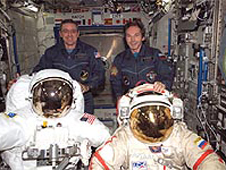 What Other Spacesuits Have Astronauts Worn?

NASA's first spacesuits were developed for the Mercury program. Mercury was the first program in which NASA astronauts flew into space. These simple suits were based on pressure suits worn by U.S. Navy pilots. Astronauts did not go on spacewalks then. The Mercury suits were worn only inside the spacecraft.

NASA's first spacewalks took place during the Gemini program. The suits used for Gemini were more advanced than the Mercury suits. But the Gemini suits were simpler than today's spacesuits. These suits did not contain their own life support. Instead, they connected to life support systems on the Gemini spacecraft with a cord called the umbilical.

Spacesuits designed for the Apollo program had to do things the first suits did not. These spacesuits had to protect astronauts walking on the moon. Unlike the other suits, the Apollo suits had boots made to walk on a rocky surface. The Apollo suits also contained a life support system, similar to the Portable Life Support Subsystem on the current suit. Having a life support system on the spacesuit allowed the astronauts to explore away from the lunar lander.

Spacesuits similar to the Apollo suits were used on the Skylab space station. Like the Gemini suits, the Skylab suits connected to life support systems on the spacecraft via an umbilical. 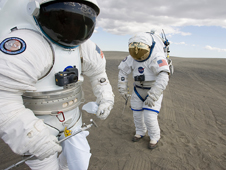 NASA is testing ideas for spacesuits that could be worn on the moon. Image Credit: NASA
>  View Larger Image

What Spacesuits Are Worn Today?

In addition to the EMU, NASA astronauts wear other suits today. The Advanced Crew Escape Suit is the orange suit that astronauts wear during launch and landing of the space shuttle. This suit cannot be worn during spacewalks. Sometimes, NASA astronauts will wear the Russian Orlan spacesuit. This suit is the Russian version of the EMU and is used for spacewalks. Another Russian suit is the Sokol. Like the Advanced Crew Escape Suit, the Sokol is designed only to be used inside a spacecraft. It is used on the Russian Soyuz spacecraft.

Technology has come a long way since the time of Apollo. The new suits will allow astronauts to do things that the Apollo suits could not. They will let astronauts move more freely, making it easier to work. The suits will be more abrasion-resistant, to protect from damage by rough surface dust.

NASA is looking at what will be needed on spacesuits for trips to Mars. Exploring Mars will involve new challenges. Unlike Earth orbit or the moon, Mars has its own atmosphere. Mars has more gravity than the moon so the suits worn on Mars cannot be too heavy.


Original Article: http://www.nasa.gov/audience/forstudents/5-8/features/what-is-a-spacesuit-58.html
› Back To Top