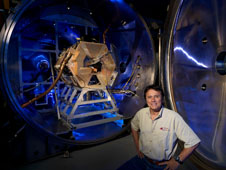 How can we travel faster in space?

Since early times, people have looked into space and wondered about its mysteries. The vastness of space has opened our minds, but its size has limited our search. We want to explore distant worlds, but how can we travel faster so we can go farther into space?

Scientists and engineers clearly knew from the start that the only way to get into space is to use rockets and rocket propulsion. The vehicles and propulsion systems developed for the Apollo program were designed to reach the moon. Using a chemical propulsion system, it took the Apollo astronauts about 2.5 days to get to the moon, traveling at speeds faster than 39,000 km/h (more than 24,000 mph).

The space shuttle uses a chemical propulsion system based upon both liquid and solid propellants. It combines the features of a rocket, aircraft, and glider and is designed to carry astronauts, satellites, and other cargo into Earths’ orbit. Traveling at approximately 29,000 km/h (18,000 mph) the shuttle orbits Earth every 90 minutes. 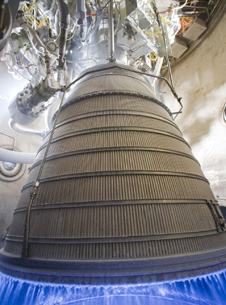 The Common Extensible Cryogenic Engine is fueled by a mixture of minus 297-degree Fahrenheit liquid oxygen and minus 423-degree Fahrenheit liquid hydrogen. As the engine burns its frigid fuels, gas composed of hot steam is produced and propelled out the nozzle, creating thrust. The cold engine nozzle cools the steam, which condenses and eventually freezes at the nozzle exit to form icicles. Image credit: Pratt & Whitney Rocketdyne (Used by permission)
›  View Larger Image

By using current technology and a spacecraft powered by chemical rocket engines, a trip to Mars could take between six to nine months. Because of the alignment of Mars and Earth, our best chance to launch occurs every 26 months.

We need to find other ways to travel to Mars and beyond, and we are currently considering alternative propulsion systems.

Nuclear thermal propulsion allows a spacecraft to travel faster by providing a more efficient, and light weight system. We would not use nuclear propulsion systems until the spacecraft was far from Earth. Spacecraft would still be launched from Earth with chemical rocket engines or be built and launched in space. A nuclear thermal propulsion system could potentially be over 100 times more powerful than chemical systems of comparable weight. A system like this could easily cut down the time needed to travel to Mars and other places in our solar system.

NASA is studying a plasma-based propulsion system called project VASIMR (Variable-Specific-Impulse Magnetoplasma Rocket). Franklin R. Chang-Diaz, the first Hispanic astronaut, is studying this system. VASIMR works by using a large electric power source (such as nuclear power) to then utilize hydrogen as a rocket propellant. Hydrogen is plentiful in the solar system, possibly allowing a VASIMR-powered spacecraft to be launched with only enough propellant to reach its destination. When it arrives, it could pick up more hydrogen to use as propellant for the return trip. According to NASA, a VASIMR flight to Mars could take a little over three months, compared to the six to nine months required by a conventional chemical rocket. Shorter flight times lessen an astronaut’s time in reduced gravity and decreases the time an astronaut is exposure to space radiation.

There is much that we want to see and explore in our Solar System and beyond. New propulsion systems will help us get there faster.


Original Article: http://education.jsc.nasa.gov/explorers/p4.html
› Back To Top