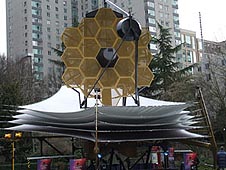 The James Webb Space Telescope, to be launched in 2013, is NASA’s next orbiting telescope.

Webb, like the Spitzer Space Telescope, will view the universe in wavelengths that cannot be seen by the human eye. Webb will observe infrared light. Objects that are not quite hot enough to glow with visible light glow with infrared light. Infrared light also pierces layers of dust that can hide objects in space, allowing Webb to see objects that normally would be blocked from view.

Infrared astronomy is important because light from the most distant objects in space is also light that started traveling billions of years ago. Because the universe is expanding, visible light gets stretched as it travels through space, turning it into infrared light.

Webb will orbit at a point four times farther away from Earth than the moon. About 940,000 miles (1.5 million kilometers) from Earth is a place called the Second Sun-Earth Lagrange Point, or L2. Here, Earth's gravity will pull Webb along, so it can "keep up" with Earth in its path around the sun. Only at the L2 point are the sun and Earth always on the same side of Webb’s sunshield, giving the telescope almost full protection from their light and heat. 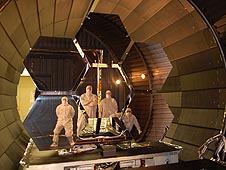 Webb engineers and scientists are getting such a large mirror into space by constructing it out of 18 hexagonal segments, then folding it up inside the rocket that will launch it into space. Once the telescope is in space, ground controllers will send a message ordering the mirror to unfurl, like a butterfly opening its wings.

Webb's unique mirror is made out of a material called beryllium. Beryllium is lightweight and changes shape much less and more predictably than glass does in cold temperatures -- which is important because the Webb telescope will be facing temperatures of -233 degrees Celsius (-388 degrees Fahrenheit). Each segment also is coated with an extremely thin layer of 24-karat gold, which reflects red and infrared light exceptionally well.

Webb's frigid temperatures are deliberate. Infrared telescopes must be kept extremely cold so that the heat from their own devices or nearby objects does not overwhelm the distant infrared radiation they are trying to detect. A sunshield the size of a tennis court will protect the telescope from light emitted by the sun or reflected by Earth and the moon.

The Webb telescope will see in infrared as well as Hubble sees in visible light. It will look at young galaxies and exploding stars in the early universe, disks of dust around stars that could be forming planets, and more. By using Webb to see the development of the early universe, astronomers hope to better understand how stars, planets and galaxies came to be. The James Webb Space Telescope represents another step in astronomers’ eternal quest to see deeper into space.

Original Article: http://amazing-space.stsci.edu/resources/explorations/groundup/lesson/scopes/webb
› Back To Top