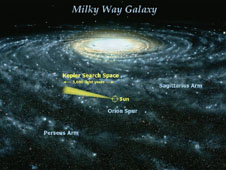 An artist's rendering shows what our galaxy might look as viewed from outside the galaxy. Our sun is about 25,000 light years from the center of our galaxy. The cone illustrates the neighborhood of our galaxy that the Kepler Mission will search to find habitable planets. Image Credit: NASA
›  View Larger Image 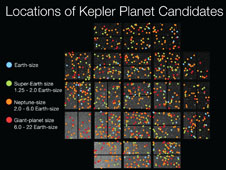 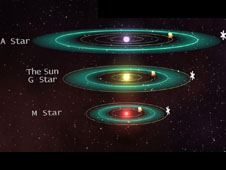 In astronomy, a habitable zone is a region of space around a star where conditions are favorable for life as it may be found on Earth. Planets and moons in these regions are the likeliest candidates to be habitable. Our sun has a temperature of about 5800K. For stars cooler than our sun (M dwarfs at 3000-4000K) the region is closer in. For hotter stars (A dwarfs at 10,000K) the region is much farther out. Image Credit: NASA
›  View Larger Image 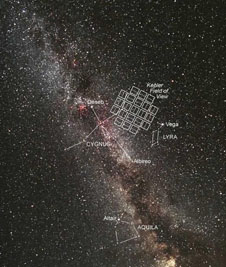 An image by Carter Roberts of the Eastbay Astronomical Society in Oakland, Calif., showing the Milky Way region of the sky where the Kepler spacecraft/photometer will be pointing. Each rectangle indicates the specific region of the sky covered by each CCD (charged coupled devices) element of the Kepler photometer. There are a total of 42 CCD elements in pairs, each pair comprising a square. Image Credit: Carter Roberts/Eastbay Astronomical Society.
›  View Larger Image

Is our Milky Way galaxy home to other planets the size of Earth? Are Earth-sized planets common or rare? NASA scientists seeking answers to those questions recently revealed their discovery.

"We went from zero to 68 Earth-sized planet candidates and zero to 54 candidates in the habitable zone -- a region where liquid water could exist on a planet's surface. Some candidates could even have moons with liquid water," said William Borucki of NASA's Ames Research Center, Moffett Field, Calif., and the Kepler Mission's science principal investigator. "Five of the planetary candidates are both near Earth's size and orbit in the habitable zone of their parent stars."

"We have found over 1,200 candidate planets -- that’s more than all the people have found so far in history," said Borucki. "Now, these are candidates, but most of them, I'm convinced, will be confirmed as planets in the coming months and years."

As of Feb. 2, 2011, the findings increase the number of planet candidates identified by Kepler to 1,235. Of these, 68 are approximately the size of Earth; 288 are "super-Earth" size; 662 are the size of Neptune; 165 are the size of Jupiter; and 19 are larger than Jupiter. Of the 54 new planet candidates found in the habitable zone, five are near Earth's size. The remaining 49 habitable zone candidates range from super-Earth size -- up to twice the size of Earth -- to larger than Jupiter. The findings are based on the results of observations conducted May 12 to Sept. 17, 2009, of more than 156,000 stars in Kepler's field of view, which covers approximately 1/400 of the sky.

"The fact that we've found so many planet candidates in such a tiny fraction of the sky suggests there are countless planets orbiting stars like our sun in our galaxy," said Borucki. "Kepler can find only a small fraction of the planets around the stars it looks at because the orbits aren't aligned properly. If you account for those two factors, our results indicate there must be millions of planets orbiting the stars that surround our sun."

"Another exciting discovery has been the tremendous variations in the structure of the confirmed planets -- some have the density of Styrofoam and others are denser than iron. The Earth's density is in between."

Kepler, a space telescope, looks for planet signatures by measuring tiny decreases in the brightness of stars caused by planets crossing in front of them -- this is known as a transit.

Since transits of planets in the habitable zone of sunlike stars occur about once a year and require three transits for verification, it is expected to take three years to locate and verify Earth-sized planets orbiting sunlike stars.

The Kepler science team uses ground-based telescopes and the Spitzer Space Telescope to perform follow-up observations on planetary candidates and other objects of interest found with the spacecraft. The star field that Kepler observes in the constellations Cygnus and Lyra can be seen only from ground-based observatories in spring through early fall. The data from these other observations help determine which of the candidates can be validated as planets.

Kepler will continue conducting science operations until at least November 2012. It will search for planets as small as Earth, including those that orbit stars in a warm habitable zone where liquid water could exist on the surface of the planet.

"In the coming years, Kepler's capabilities will allow us to find Earth-sized planets in the habitable zone of other stars," Borucki said. "Future missions will be developed to study the composition of planetary atmospheres to determine if they are compatible with the presence of life. The design for these missions depends on Kepler finding whether Earth-sized planets in the habitable zone are common or rare."

The Kepler Mission team has discovered a total of 15 exoplanets, including the smallest known exoplanet, Kepler-10b.

"In one generation, we have gone from extraterrestrial planets being a mainstay of science fiction, to the present, where Kepler has helped turn science fiction into today's reality," said NASA Administrator Charles Bolden. "These discoveries underscore the importance of NASA's science missions, which consistently increase understanding of our place in the cosmos."

Adapted from: http://www.nasa.gov/mission_pages/kepler/news/kepler_data_release.html
› Back To Top