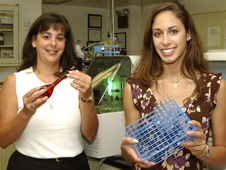 Monsi Roman, left, a microbiologist at NASA's Marshall Space Flight Center in Huntsville, Ala., works in a lab with Coral Blanche, a summer intern and senior at Huntsville High School. They use a variety of tools to analyze microbes and ensure safe water and air for the crew of the International Space Station. Image Credit: NASA
›  View Larger Image 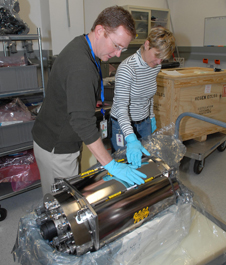 A replacement distillation assembly for the International Space Station's water recycling system is being checked in the Space Station Processing Facility at NASA's Kennedy Space Center in Florida. The unit is part of the Urine Processing Assembly that removes impurities from urine in an early stage of the recycling process. Image Credit: NASA
›  View Larger Image 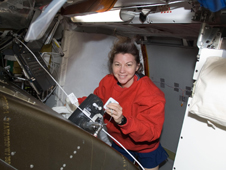 When Monserrate Roman came to the United States from Puerto Rico, she never dreamed she'd be a scientist working to ensure safe water and air for the crew of the International Space Station, the world's largest space laboratory.

Monsi Roman is a microbiologist at NASA's Marshall Space Flight Center in Huntsville, Ala. Roman studies microbes, which are living organisms including viruses, bacteria, fungi and parasites. Microbes are only visible under a microscope, but they are everywhere. Most are harmless, and many do useful jobs like helping us digest food. Roman’s job is like a detective's, checking the tiny beings to see how they will behave on the space station.

"My job is to be a detective, to determine how microbes will behave under different situations and in different locations, such as the nooks and crannies of the space station," explained Roman, chief microbiologist for the Environmental Control and Life Support Systems project at Marshall.

Everyone who visits the International Space Station comes with his or her own unique set of microbes. And since crew members, visitors, experiments and hardware hail from 15 station partner countries, Roman must study an international, multicultural group of microbes. She often collaborates with scientists and engineers from other countries.

"Microbes were the first inhabitants of the space station, hitchhiking into orbit on equipment before people ever arrived," Roman said. "Each microbe is unique, and, if left unchecked, some will thrive and could eventually eat many materials."

The station was designed with materials that are microbe-resistant. Temperature and humidity are controlled to discourage microbe growth. Roman helps ensure microbes aren't a threat by monitoring the station's air and water system. She works closely with Marshall engineers who are designing and testing the Oxygen Generation and Water Recovery equipment, a more sophisticated air and water recycling system to be installed on the station. It will dramatically reduce the amount of supply vehicles needed to deliver water to the station.

Roman's fascination with science and living organisms blossomed when she was a child. Her science teachers nurtured her curiosity, encouraged her to participate in science fairs, and provided opportunities for her to work with real scientists. Roman carries on that tradition by helping with classes at NASA's Challenger Learning Centers and at the agency's Educator Resource Center in Huntsville. Every summer, she mentors a student who works by her side as an intern at Marshall.

"As I always tell my three sons and the students I mentor: Don't listen to anyone who says you can't," said Roman. "As a little girl, I never dreamed I would be helping NASA build part of a space station. It has been fascinating watching the station go from paper drawings to a real home and workplace in space."

Originial article: http://www.nasa.gov/centers/marshall/news/news/releases/2003/03-101.html
› Back To Top