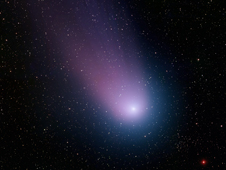 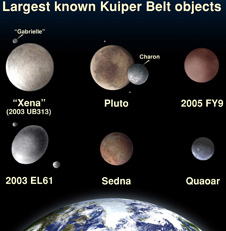 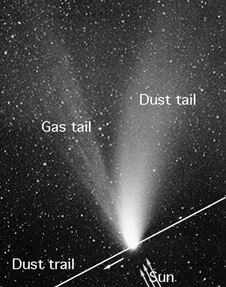 This artist's concept shows a comet dust trail and dust tail. The dust trail is made of particles the size of sand grains and pebbles. The particles are large enough that they are not affected much by the sun’s light and solar wind. The dust tail, on the other hand, is made of grains the size of cigarette-smoke particles. The sun's light blows these grains out of the dust coma near the comet nucleus. Image Credit: NASA
›  View Larger Image 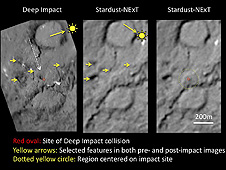 This image shows the surface of comet Tempel 1 as seen before and after NASA's Deep Impact mission sent a probe into the comet in 2005. The region was imaged by Deep Impact before the collision (left), then six years later on Feb. 14, 2011, by NASA's Stardust-NExT mission. It flew by the comet, snapping pictures along the way (middle and right images). The white arrow shows the trajectory of the impact probe, and the red oval shows the area of impact, based on the trajectory data. The large yellow arrows show the location of the sun, while the little yellow arrows show selected features in the both the pre- and post-impact images. The yellow dotted circle shows the region of the impact site. Image Credit: NASA
›  View Larger Image

In the distant past, people were both awed and alarmed by comets. They were perceived as being "long-haired" stars that appeared unpredictably and unannounced in the sky. To some ancient observers, an elongated comet looked like a fiery sword blazing across the night sky. Chinese astronomers kept extensive records for centuries, including illustrations of characteristic types of comet tails. They recorded the times of cometary appearances and disappearances in addition to celestial positions. These historic comet annals have proven to be a valuable resource for later astronomers.


We now know that comets are leftovers from the dawn of the solar system around 4.6 billion years ago. Comets consist mostly of ice coated with dark organic material. They have been referred to as dirty snowballs. They may yield important clues about the formation of our solar system. Comets may have brought water and organic compounds, the building blocks of life, to early Earth and other parts of the solar system.


Each comet has a tiny frozen part, called a nucleus, often no bigger than a few kilometers across. The nucleus contains icy chunks and frozen gases with bits of embedded rock and dust. The nucleus may have a small rocky core.


As theorized by astronomer Gerard Kuiper in 1951, a disc-like belt of icy bodies exists just beyond Neptune, where a population of dark comets orbits the sun in the realm of Pluto. These icy objects, occasionally pushed by gravity into orbits bringing them closer to the sun, become the so-called short-period comets. They take less than 200 years to orbit the sun, and in many cases their appearance is predictable because they have passed by before.


Less predictable are long-period comets, many of which arrive from a region called the Oort Cloud about 100,000 astronomical units (that is, 100,000 times the distance between Earth and the sun) from the sun. These Oort Cloud comets can take as long as 30 million years to complete one trip around the sun.


A comet warms up as it nears the sun and develops an atmosphere, or coma. The sun's heat causes ices on the nucleus surface to change to gases so that the coma gets larger. The coma may be hundreds of thousands of kilometers in diameter. The pressure of sunlight and high-speed solar particles (solar wind) blows the coma materials away from the sun, forming a long, and sometimes bright, tail. Comets actually have two tails -- a dust tail and a plasma (ionized gas) tail.


Most comets travel a safe distance from the sun -- comet Halley comes no closer than 89 million kilometers (55 million miles). However, some comets, called sun-grazers, crash straight into the sun or get so close that they break up and evaporate.


Scientists have long wanted to study comets in some detail, tantalized by the few 1986 images of comet Halley's nucleus from the Giotto mission. NASA's Deep Space 1 spacecraft flew by comet Borrelly in 2001 and photographed its nucleus, which is about 8 kilometers (5 miles) long.


NASA's Stardust mission successfully flew within 236 kilometers (147 miles) of the nucleus of Comet Wild 2 in January 2004. Stardust collected cometary particles and interstellar dust for a sample return to Earth in 2006. The photographs taken during this close flyby of a comet nucleus show jets of dust and a rugged, textured surface. Analysis of the Stardust samples suggests that comets may be more complex than originally thought. Minerals that formed near the sun or other stars were found in the samples. This finding suggests that materials from the inner regions of the solar system traveled to the outer regions where comets formed.


Another NASA mission, called Deep Impact, consisted of a flyby spacecraft and an impactor. In July 2005, NASA released the impactor into the path of the nucleus of comet Tempel 1 in a planned collision, which vaporized the impactor and ejected massive amounts of fine, powdery material from beneath the comet's surface. En route to impact, the impactor camera imaged the comet in increasing detail. Two cameras and a spectrometer on the flyby spacecraft recorded the dramatic excavation that revealed the interior composition and structure of the nucleus.


The Deep Impact spacecraft and the Stardust spacecraft are healthy and have been retargeted. Deep Impact's mission, EPOXI (Extrasolar Planet Observation and Deep Impact Extended Investigation), comprises two projects: the Deep Impact Extended Investigation, which encountered comet Hartley 2 in 2010; and the Extrasolar Planet Observation and Characterization investigation, which will search for Earth-size planets around other stars. NASA returned to comet Tempel 1 in 2011, when the Stardust New Exploration of Tempel 1, or NExT, mission observed changes in the comet since Deep Impact's 2005 encounter.


Originial article: http://solarsystem.nasa.gov/planets/profile.cfm?Object=Comets&Display=OverviewLong
› Back To Top