What Are Wind Tunnels? 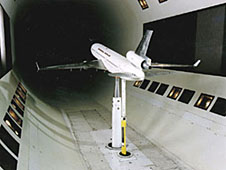 
How Do Wind Tunnels Work?
Most of the time, powerful fans move air through the tube. The object to be tested is fastened in the tunnel so that it will not move. The object can be a small model of a vehicle. It can be just a piece of a vehicle. It can be a full-size aircraft or spacecraft. It can even be a common object like a tennis ball. The air moving around the still object shows what would happen if the object were moving through the air. How the air moves can be studied in different ways. Smoke or dye can be placed in the air and can be seen as it moves. Threads can be attached to the object to show how the air is moving. Special instruments are often used to measure the force of the air on the object. 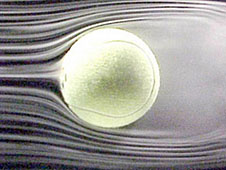 How Does NASA Use Wind Tunnels for Aircraft?
NASA has more wind tunnels than any other group. The agency uses the wind tunnels in a lot of ways. One of the main ways NASA uses wind tunnels is to learn more about airplanes and how things move through the air. One of NASA’s jobs is to improve air transportation. Wind tunnels help NASA test ideas for ways to make aircraft better and safer. Engineers can test new materials or shapes for airplane parts. Then, before flying a new airplane, NASA will test it in a wind tunnel to make sure it will fly as it should.

NASA also works with others that need to use wind tunnels. That way, companies that are building new airplanes can test how the planes will fly. By letting these companies use the wind tunnels, NASA helps to make air travel safer.

Wind tunnels are important in making the new Ares rockets and Orion spacecraft. Ares and Orion are new vehicles that will take astronauts into space. NASA engineers tested ideas for the design of Ares in wind tunnels. They needed to see how well Ares would fly. Engineers tested Orion models. They needed to know what would happen to different designs when the spacecraft came back through the atmosphere. 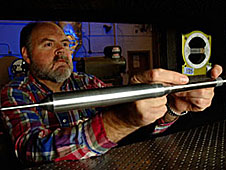 Long after the first design work is finished, NASA can still use wind tunnels. Wind tunnel tests have helped NASA change the space shuttle to make it safer. Wind tunnels will keep helping make all spacecraft and rockets better.


What Types of Wind Tunnels Does NASA Use?
NASA has many different types of wind tunnels. They are located at NASA centers all around the country. The wind tunnels come in a lot of sizes. Some are only a few inches square, and some are large enough to test a full-size airplane. Some wind tunnels test aircraft at very slow speeds. But some wind tunnels are made to test at hypersonic speeds. That is more than 4,000 miles per hour!