Grow Text SizeShrink Text Size
To Infinity and Beyond! 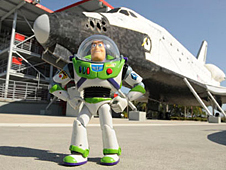 Buzz Lightyear has a new mission. He is going to the International Space Station. He will help NASA astronauts bring a new piece to the space station.

Buzz Lightyear is flying into space on the space shuttle Discovery in May. He will ride with the crew on the STS-124 shuttle mission. The mission is taking a new laboratory to the space station.

The new laboratory is called "Kibo." Kibo means hope in Japanese. NASA and the Japan Aerospace Exploration Agency are working together to add the new lab to the space station.

The new lab is about the size of a large bus. It will be the station's largest laboratory. In the lab, astronauts will study a lot of things, like medicine, the human body and Earth. 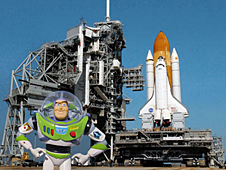 Buzz will stay on the station for about six months. He plans to ride home on the space shuttle Endeavour in November.

NASA and Disney/Pixar are celebrating Buzz's spaceflight and the STS-124 mission by challenging students with five "mini-missions" in the NASA Kids' Club.

Today's students will be the people who make NASA's future happen. That is why NASA is helping students learn. NASA wants to get students excited about things like science and math. That way, those students can be the scientists, engineers and astronauts of the future. 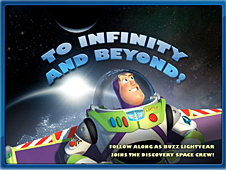 Load the Shuttle
Help Buzz Lightyear get ready for liftoff! Buzz needs help loading parts and supplies into the space shuttle. To solve the puzzle, think about how much the parts weigh and how much space is on the shuttle.

Mission Match-up
Countries around the world have helped build the International Space Station. In this game, match the name of the country with how that country helped humans learn about spaceflight.

I Spy
Help Buzz find hidden objects on a space station. Learn how space technology changes lives everyday. All of the hidden items were made with the help of NASA.

Toys in Space
Have you ever wondered what a yo-yo or a soccer ball would do in space? Help Buzz find out by flying him to platforms with toys on them.

Check back while the shuttle is in space for special messages from Buzz Lightyear.