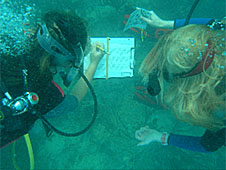 In October 2007, a group of 35 students from Florida took part in "Operation Deep Climb."

This wasn't a super-secret spy mission. It was a trip to Hawaii. The students went deep down into the Pacific Ocean. At the bottom they saw an old submarine. They also climbed to the top of a mountain, one of the tallest in the world.

These students, in middle and high school, are known as SCUBAnauts. Who are SCUBAnauts? They are young people who explore under water. They also help scientists do research.

SCUBAnauts learn how to dive in the ocean. They practice moving in the water only using their feet. This is an important skill. That's because their hands need to be free to carry cameras and other tools. SCUBAnauts also learn about first aid and what to do in an emergency. 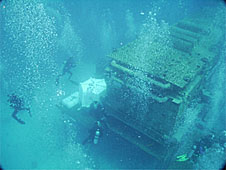 SCUBAnauts gather information about the water. For example, they measure water temperature and how much salt is in the water.

They also observe coral reefs. Corals are animals that live in the ocean. But they look more like plants than animals. Sometimes corals form "reefs." This is when they grow next to or on top of each other. Studying coral reefs can tell you a lot about the ocean. Some reefs are being damaged by pollution, climate change and too much fishing.

But SCUBAnauts don't spend all their time in the water. 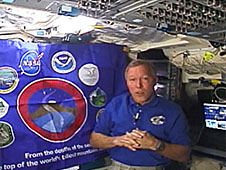 Five months later, Dominic was on the space shuttle Endeavour. He unrolled a blue banner as Endeavour flew through space. On it were the words "Operation Deep Climb." The students were excited that the name of their project was in space.