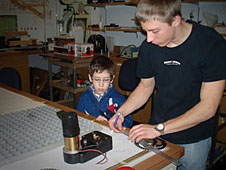 Do you like robots? Would you like to help build one? One first-grade student in Illinois got to help a college team build their first robot. They even let Owen name the robot. He named the robot HOPE.

Oakton Community College was picked to be in a NASA robotics contest. Owen went to the robot club meetings. He helped team leader Mike Mazur put pieces of the robot together. The team worked for months to get HOPE to work. One day, the team took the robot to Owen’s school. Owen told his class how HOPE worked. When he finished, the class got to see and touch HOPE.

Owen got to go to Florida to see HOPE in a contest with 35 other robots. The robot teams came from all over the world. The robots had 15 minutes to collect as much "moon" dirt as they could. The dirt wasn’t really from the moon. It was just made to look and feel like moon dirt. 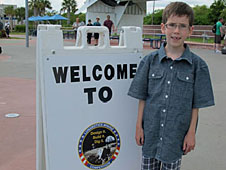 Here is what Owen said about the trip:

"On Saturday, we went to HOPE's competition at the Kennedy Space Center. She didn't win but she did well. There were supposed to be 60 teams in Florida, but only 36 showed up. A lot of the robots broke down, especially the communications systems. HOPE started out strong in the Lunarena but her powerful treads caused her to tip over and activate the abort button. She couldn't get back on her treads.

"A real astronaut came along and autographed HOPE. His name was Jon McBride. I got my picture taken with him.

"Thanks for rooting for me!" 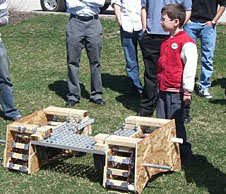