What would you do if you had a robot? Find out what one is before you decide!

The list below will tell you about a few NASA robots. Some are still being tested. Some are being used right now! 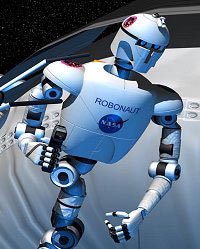 NASA will use robots like Robonaut to go on spacewalks. Image Credit: NASA

In the past, robots have helped NASA explore. Today, they are still important to NASA. In the future, we will use robots to help return humans to the moon and to travel to Mars and beyond.

Adapted from Robonaut   →
› Back To Top