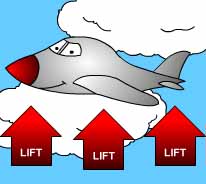 Airplanes need four forces to fly. Lift is one of them. Image Credit: NASA

How do airplanes stay in the air?


Four forces keep an airplane in the sky. They are lift, weight, thrust and drag.


Weight is the force that pulls the airplane toward Earth. Airplanes are built so that their weight is spread from front to back. This keeps the airplane balanced. 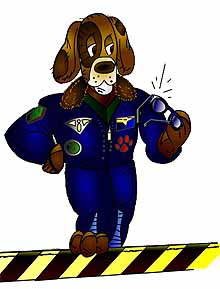 Thrust is the force that moves the airplane forward. Engines give thrust to airplanes. Sometimes an engine turns a propeller. Sometimes it is a jet engine. It doesn't matter as long as air keeps going over the wings.


Drag slows the airplane. You can feel drag when you walk against a strong wind. Airplanes are designed to let air pass around them with less drag.


An airplane flies when all four forces work together. But, most airplanes need one more thing: They need a pilot to fly them!
› Back To Top