Grow Text SizeShrink Text Size
Keeping Cool With Shadows
You might not always notice it. But when you're in the sun, your shadow is often nearby. It may be in front of you or behind you. Or it may be to your side. Wherever it is, your shadow looks like you and moves like you. 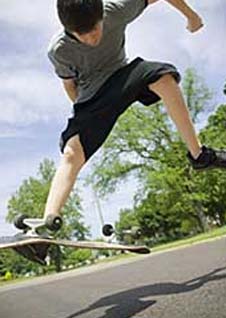 Have you seen your shadow today? Image Credit: Liquid Library

Two things are needed to make a shadow. The first is light. The second is something that blocks the light. Together, these two things make an area that is darker than what is around it. This area is called a shadow.

Outside, people make shadows when they block light from the sun. Think about what happens when the sun is behind you. Your body blocks some of the sun's light, causing a shadow to form in front of you. The shadow takes on the shape of your body.

Trees and building also make shadows. Their shadows can keep you cool on a hot sunny day. Shadows stay cool because they are blocked from the sun's light. The sun's light is what heats the ground, which then heats the air above.

Other things make shadows, too. Clouds make shadows when they pass in front of the sun. A baseball cap makes a shadow on your face, keeping it cool.

Can you think of a really big shadow? Here's a hint: You see it every night. 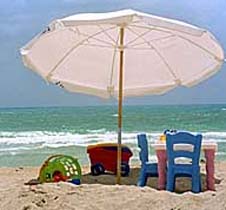 The shadow from an umbrella on the beach can keep you cool. Image Credit: Liquid Library

The night sky is simply a very large shadow. The sky turns dark when your part of Earth spins away from the sun. Earth blocks the sun's light from reaching the sky above you. No light means no heat. That's why nights are almost always cooler than days.

Shadows exist in space, too. MESSENGER is a NASA spacecraft on its way to study Mercury. Mercury is the closest planet to the sun. The scientists who built MESSENGER wanted to make sure it wouldn't get too hot. So they covered the side that faces the sun with a large piece of fabric. The fabric is called a "sunshade." It feels like a hard cloth. It makes a shadow by blocking the sun's light. This shadow keeps the spacecraft cool.

Back on Earth, you can do a lot of fun things with shadows. Outside, you can trace a shadow with chalk. Then you can watch how it changes as the sun moves across the sky. Inside, you can make shadows using a flashlight or lamp and a piece of poster board.

You can even chase your own shadow. Do you think you'd ever catch it?

Never look directly at the sun when learning about or playing with shadows. Looking at the sun can hurt your eyes.