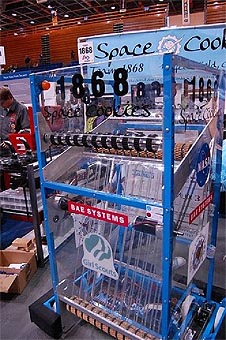 
Click for larger image
In a packed arena, students are yelling and cheering in the bleachers at a national championship event. But this is no traditional sporting event: It's a FIRST Robotics Competition.

FIRST stands for For Inspiration and Recognition of Science and Technology. The FIRST Robotics Competition engages young people in an exciting competition that teaches them science, engineering and technology skills as part of a mentor-based program. Teams of high school students design, build and program robots to out-perform their opponents. This exciting challenge is the reason California Girl Scout Sarra Hilali joined a NASA-sponsored FIRST robotics team.

"What really made me join the team was an amazing photo that they showed us," Hilali said. "The photo was of people filling and blocking an entire street during FIRST Robotics Championships in Atlanta. It was amazing to me, to see all these people from around the world gathered together just for this hunk of metal that they built in six weeks. I felt that I just had to be a part of that experience."

Each year, FIRST develops a unique robotics challenge. Teams are given a common problem to solve, using standard parts kits and a common set of rules. In six weeks, teams design and build robots that compete in the challenge.

Hilali is part of the all-girls Space Cookies team, which formed in 2006 out of a partnership between NASA's Ames Research Center in Moffett Field, Calif., and the Girl Scouts of Northern California. Sponsored by NASA and BAE Systems, the team works with NASA mentors to build its robot. From computer-aided designs to mechanical engineering to software programming, the project is completed in six short weeks. "Those are probably the fastest six weeks in my life," Hilali said. "There are times when we are at the lab very late to get the robot done."

Building a robot can be a daunting task for anyone, but for 12 girls with little to no robotics experience, building a competitive robot in six weeks was especially challenging. The team worked hard with support from mentors, parents, NASA engineers, local companies and universities, and another Ames' FIRST team, a boys' team, called the Cheezy Poofs. 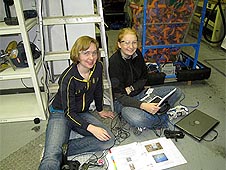 
Click for larger image
At the 2006 FIRST Championship, the team of 12 girls won the Highest Rookie Seed and Rookie All-Star awards at the Silicon Valley Regional. It also received a special judge's award.

Three years later, the Space Cookies team was a finalist in the Silicon Valley Regional and received the Engineering Inspiration Award for their community outreach. As part of their community outreach, the team members coach a FIRST Lego League team, called The Golden Surfers, which consists of fourth- and fifth-graders attending East Palo Alto Charter School.

The team competed in March in the Silicon Valley Regional Competition at San Jose State University. In this year's event, called "Breakaway," two alliances of three teams competed on a bumpy, 27-foot-by-54-foot field, attempting to earn points by collecting soccer balls in goals. The competitors earned additional bonus points for each robot suspended in air and not touching the field at the end of the match. The Space Cookies won the Silicon Valley Regional Team Spirit Award, given to a team that celebrates extraordinary enthusiasm and spirit through exceptional partnership and teamwork. The team also placed second in competition play along with their alliance mates from Woodside and Rohnert Park, Calif.

The team welcomes and encourages girls of all interests; no robotics experience is necessary. The girls learn as they go. "Depending on the day, girls are designing mechanical assemblies, programming robot controls, planning community outreach and writing Web communications," said Ann Wettersten, the Girl Scout leader of Space Cookies. "It is fast-paced and fun, and everyone has an opportunity to work hands-on with math, physics and engineering."

Mark León, manager of the NASA Robotics Alliance Project at NASA's Ames Research Center, is co-founder of the Space Cookies team. "This activity is literally an investment in NASA's future," León said. "The Science Mission Directorate is cultivating the future robotics engineering workforce." 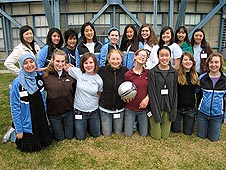 The Space Cookies are getting ready for their fifth season of FIRST Robotics. Image Credit: Girl Scouts of Northern California


Click for larger image
Wendy Holforty is a NASA engineer who has mentored the team since it began. Holforty has witnessed the girls' engagement with NASA and the team as defining moments in many of their career choices. "They never cease to amaze me with their creativity, enthusiasm, determination and dedication," Holforty said. "Each year, they come from all walks of life and all backgrounds and, in no time, bond together as if they have been lifelong friends. Most of them come to us with little or no robotics or engineering background, yet when they graduate they go off to very impressive colleges and universities to study science or engineering."

"But after my experience with this amazing team, I understand that engineering goes far beyond that, that engineering is a challenge that needs to be solved and that math, physics and other sciences are the tools that help you accomplish that goal. Math has become useful, a life tool, not a couple of classes that I have to pass."

NASA's collaboration with FIRST is coordinated through NASA's Robotics Alliance Project and supported through NASA's Science Mission Directorate. NASA is one of several organizations that make the robotics competition possible. Partnering with FIRST supports the agency's goal of attracting and retaining students in science, technology, engineering and mathematics disciplines.