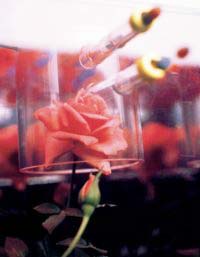 Shakespeare knew a few things about romance...and roses. But here's something he never considered: roses in space. Would they smell as sweet in Earth orbit?

It's not as silly as it sounds--at least perfume industry giant International Flavors & Fragrances (IFF) didn't think so. New fragrances are much sought after in the competitive perfume industry. Some years ago IFF researchers began to wonder, Could space-traveling flowers yield something new and exotic? The answer might prove profitable, they figured.

In 1998, IFF teamed with the Wisconsin Center for Space Automation and Robotics (WCSAR), a NASA Commercial Space Center (CSC) at the University of Wisconsin. WCSAR's job is to help companies research new products in space. NASA's Space Product Development program at the Marshall Space Flight Center supports 15 such CSC's around the country.

WCSAR researchers had developed a plant growth chamber called ASTROCULTURETM for the middeck of the space shuttle. It provides plants with the appropriate temperature, humidity, light, and nutrients during spaceflight, explains Dr. Weijia Zhou, WCSAR director. ASTROCULTURETM was perfect for IFF's purpose, and so on Oct. 28, 1998, a tiny rose selected by IFF was able to leave Earth for a 10-day flight onboard the shuttle Discovery (STS-95). 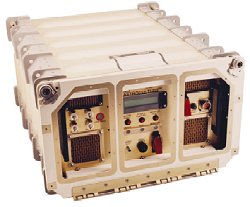 IFF researchers quickly learned that what we call a rose does indeed smell sweet in space ... but it does not smell the same.

Here's why:
Fragrance, in flowers, is a variable and elusive commodity, evolved solely to help plants reproduce by attracting the insects and animals they need to spread their pollen, or sperm, around. Although we tend to think of floral smells as sweet and appealing, flowers produce a variety of odors, depending on the preferences of their pollinators. If bees are lured by the same kinds of smells that we like, carrion flies, for example, may be drawn by ranker odors, like that of skunk cabbage.

But whatever they smell like, the odors themselves come from "volatile oils," also known as essential oils, because they carry the essential fragrance of the plant. These highly concentrated plant extracts all share certain traits: For example, they readily bind to receptors in olfactory neurons. They also tend to be soluble in alcohol, but not water, and they often feel oily. Most important is that they evaporate at room temperature. Indeed, the fragrances used in perfumes are classified on a scale from 1 to 100, according to how readily they dissipate.

A plant's production of volatile oils is strongly affected by its environment, explained Dr. Braja Mookherjee, who, until his recent death, was Director of Global Natural Products at IFF. Some plants, for example, produce more oils at night when their pollinator is active, and some produce more in the daytime. Temperature, humidity, and the age of the flower are influential too. 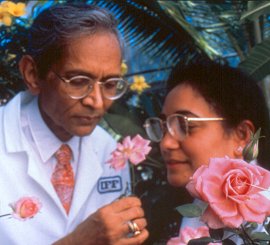 It's no wonder, said Mookherjee, that low-gravity should affect a flower's smell just as other environmental factors do.


The flower that flew on STS-95 was a miniature rose called "Overnight Scentsation"--a plant no more than seven inches high, with two buds just ready to open. The rose needed to be small to fit inside ASTROCULTURETM, which is a 17 by 9 by 21 inch enclosure.

"Ninety-nine percent of miniature roses have no odor," said Mookherjee, but Overnight Scentsation is an exception. It emits a fragrance, which Mookherjee described as "a very green, fresh rosy note."

In low gravity, said Mookherjee, the rose actually produced fewer volatiles than it did on Earth. But the fragrance that it did generate was critically altered. The flower in space had a more "floral rose aroma," which is aesthetically pleasing.

And, no, the astronauts didn't just sniff the flower.

To collect the scent, they reached into the ASTROCULTURETM chamber and touched the rose using a tiny silicon fiber. Less than one centimeter long, and only 1 to 2 millimeters in diameter, the fiber was coated with a special liquid to which molecules around the flower petal adhere. After the shuttle returned to Earth, IFF researchers took the fiber and analyzed the molecules they found on it. 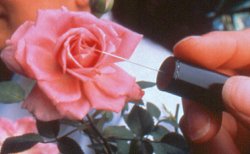 A lab technician demontrates the use of a silicon fiber to collect scent-molecules from a rose. Credit: International Flavors & Fragrances.

"We identify the constituents, we know the quantity, and then we can synthesize [the fragrance] here in the lab," explained Mookherjee. The fragrance of a rose is made up of nearly 200 different compounds, he added.


The rose was sampled four times throughout the STS-95 shuttle mission. Each time, says Mookherjee, they got a different result. The scent that they finally arrived at was the average of those samplings, and the new fragrance has since been incorporated into "Zen", a perfume produced by the Japanese company Shiseido.

The collaboration between IFF and WCSAR will continue on STS-107, a shuttle mission slated for launch in January 2003. This time the plan is to send up two different plants--a rose and an Asian rice flower--again placed in the ASTROCULTURETM facility. Like Romeo and Juliet, the flowers will touch each other. This as well as the low gravity, said Mookherjee, will alter the molecules they emit.

The ability to do research in space, concluded Mookherjee, gives a whole new dimension to the field of fragrance studies. "It's a fantastic opportunity," he said ...one that the Bard himself might have appreciated.