Life on the Moon
Visions of hovering spacecraft, lunar greenhouses and dome-like habitats on the cratered surface of the moon came to life in the artwork of students who used their artistic talents to illustrate what it may someday be like to live and work on the moon.

The creations were entries in NASA's first Life and Work on the Moon art contest. Sponsored by NASA's Langley Research Center in Hampton, Va., for NASA's Exploration Systems Mission Directorate, the contest challenges university and high school art and design students to partner with science and engineering departments to create art that represents living and working on the moon.

Such collaboration has the potential to generate new ideas for living and working on other worlds, resulting in more successful long-duration space missions. The contest supports NASA's goal of attracting and retaining students in science, technology, engineering and mathematics, and strengthening the agency's and the nation's future workforce.

Judges rated the entries on originality, creativity, artistic elements and validity of concept.

College student Justin Burns illustrated a lunar traffic jam for his winning entry in the 2008 contest. The University of Memphis design student said his inspiration for the long line of lunar traffic was actually life on Earth.

"I don't see it much different than life on Earth, to be honest," Burns said of future habitation on the moon. "I chose to illustrate a realistic problem that would most likely occur on the moon: a traffic jam. Of course they have high-tech gear, futuristic vehicles and tunnels to get from one part of town to the other ... but also there is a traffic jam. I tried to attack this problem in a funny, realistic situated way that just might occur on the moon."

Burn's illustration shows a woman on a "space motorcycle" with a long line of traffic behind her. The vehicles, including a "space car" and a "space truck," are traveling in an enclosed tunnel from an enclosed city in the background.

Second-place winner Johnathan Culpepper won for his painting, "A Busy Day on the Moon." Culpepper, who is pursuing a bachelor's degree in environmental science at Medgar Evers College, part of the City University of New York, said the contest challenged him to learn more about the environment on the moon and the risks to astronauts. He researched dangers like cosmic rays and radiation, the effect of reduced gravity on human bones, and the types of natural lunar resources that could be used to construct facilities.

In his art Culpepper addresses the conditions he studied by incorporating some of the major facilities needed at a lunar outpost, including a water conservation and management facility, living quarters, and a lunar power station. He also included the spacecraft that astronauts would use to travel to and from the moon -- the spacecraft that he says would double as a research center -- and motorcycle-like moonbuggies to get around.

"Most importantly, I appreciated the way I got to showcase my expertise as a young scientist, engineer, environmentalist and artist," Culpepper said.

In third place, University of Cincinnati graduate students Lann Brumlik and Corey DiRutigliano created a poster using actual images of the moon and incorporating architectural plans for a "lunar health habitat ... in support of the physiological and psychological well-being of our future lunar citizens."

Both students are in the university's College of Design, Architecture, Art, and Planning. In their entry "Enabling Exploration," Brumlik and DiRutigliano explored the opportunities as well as the difficulties of creating habitats for a sustained human presence on the moon.

The duo familiarized themselves with the critical considerations of lunar habitation by researching NASA's plans for returning to the moon as well as information gathered on past NASA missions. "This research revealed a range of information such as environmental conditions and their potential physiological and psychological implications on lunar inhabitants that helped us establish parameters for our design," Brumlik said.

"While we wanted the image of the design to convey the sense of adventure and technological advancement inherent in the exploration of the lunar frontier and beyond, we also wanted to remain connected to the practical considerations of this mission as revealed by our initial research."

Brumlik's and DiRutigliano's participation in the contest was part of their graduate assistantships and a larger design project focused on enabling the exploration of new frontiers and extreme environments. 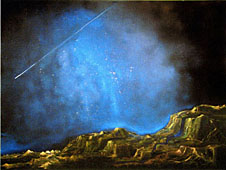 Artist Ellen Ladwig's painting, "The Perseid Meteor Shower on a Newly Terra-formed Moon," placed fourth in the contest. The University of Missouri fine arts senior said her inspiration for the painting came from images by NASA's Hubble, Chandra and Spitzer telescopes. She combined the awesome views of the universe from NASA imagery with her own imagination about living on the moon.

"In (astronomy) class, I imagined a moonscape with green hills, a sky shimmering with stars, and a deep lake with a waterfall," Ladwig said. "... Man must first terra-form the moon ... creating a living environment with water, plants and a breathable atmosphere ...."

Ladwig is currently working on a senior exhibit of paintings based on NASA images. She said her desire is to communicate through art the awe of science and space. "My hope is that the viewer will feel as if they were personally experiencing the sight," she said.

For his entry, Asa Schultz, who tied for first in the high school division, focused on the needs of people living on the moon. Schultz's drawing "Pole Colony" depicts greenhouses and solar panels on the surface of the moon. "The greenhouse would supply food and oxygen, while the solar panels would power the colony's energy needs," Schultz said. 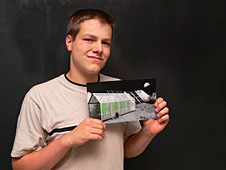 In his drawing of a lunar colony, high school winner Asa Schultz included greenhouses, to supply food and oxygen on the moon, and solar panels to provide energy. Image Credit: Asa Schultz

In his artist's statement, Schultz proposed a special glass to prevent solar radiation and space debris from damaging the greenhouses. He also discussed where on the moon to place greenhouses and solar generators.

"These installments would need to be placed high on a plateau in the polar regions for the favorable lighting conditions, as these high polar areas receive long periods of sunlight, perfect for crop growth and solar energy needs," Schultz said. "Due to the angle of the sun, they also have low shaded craters, potential spots for ice, and in turn, a water supply. These spots in the polar region of the moon are the most feasible places for lunar colonization, and I wanted to illustrate how a colony there might look."

The other high school winner, William Zhang, created a piece titled "Moon and Beyond." Zhang, a student at the Skoldberg Art Academy in California, created an image of lunar cities under bubble-shaped domes as an efficient way of providing a safe and livable environment.

"The moon has no atmosphere, let alone oxygen," Zhang said. "In order to live on it, we need to have a way of keeping oxygen on the moon. A bubble dome is the most efficient way of encasing civilization on the moon. It is the best shape to hold air pressure. Civilization inside these domes could be similar to life on the Earth."

William Zhang's visions in "Moon and Beyond" don't stop at the moon but illustrate how lunar colonists may be looking on to Mars. Image Credit: William Zhang

Zhang's image also illustrates that on Earth explorers are looking to the moon, and once on the moon they may be looking on to Mars.

"In my artwork, I wished to portray not only what life on the moon may look like, but also what our goals would be after succeeding in colonizing the moon," Zhang said. "What's next? We could use the moon as a stepping stone for exploration to Mars."

Students with their own ideas for what life on the moon will be like are encouraged to enter the 2009 Life and Work on the Moon art contest. Entries are accepted in three categories: two-dimensional, three-dimensional, and digital, including video. Prizes include awards and exhibit opportunities. Entries are due no later than March 15, 2009.