Grow Text SizeShrink Text Size
Driving Lessons
In its 15th year, NASA's annual Great Moonbuggy Race continues each year to draw more and more student teams from high schools and colleges across the nation and around the world. The roster includes returning teams, some of which have participated every year since the race's start, and rookie teams that are giving the moonbuggy a shot for the first time. 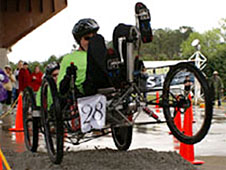 Whether it's their first year or 15th, teams' mentors say the challenge is making a positive impact on students.

"This project is starting to stir up excitement in STEM (science, technology, engineering and mathematics) in our district and in our community as well," Krohn said. "We have students going into college in STEM fields that, as a result of being on moonbuggy, students know that this is what they want to do."

The 2008 race was Lima's second year to participate, and both years the school entered two teams. In its first year, the school won the spirit award and the pit crew award; its teams placed 12th and 16th. This year, Lima won the most improved award, and their teams placed fourth and 10th.

Krohn said the experiences students gain as they design and build their vehicle include applying math and physics principles, solving problems, working as a team, using computer-aided design software, and learning to weld and to machine materials.

Once at the race, all of that hard work pays off, Krohn said. "They get to feel pride when they see the moonbuggy that they had worked on for one year zoom by on the course," Krohn said. "You can't teach pride in a classroom."

Students from Erie, Kan., certainly have a lot to be proud of. In 2008, their fifth year to participate in the moonbuggy competition, one of the Erie High School teams came in first and achieved the school's first victory.

Eric Craft advises the teams as part of the school's Prototyping and Problem-Solving class. Craft heard about the race while a student at Pittsburg State University in Kansas. Pittsburg State has been quite successful in the 12 years it has competed in the moonbuggy race. It has come in first place several times and won awards for best design.

Craft wasn't a part of the university's moonbuggy teams, but he knew about the teams' successes. He said the moonbuggy challenge is a perfect project for his problem-solving class because of the many issues students must address. Preparing for the moonbuggy race teaches Craft's students machine and design skills, and lessons in prototyping, problem-solving, trial-and-error and the engineering design process. 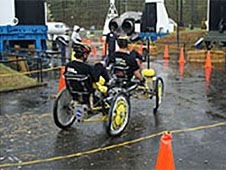 A team from the Huntsville Center for Technology bent its wheels early in the race but still managed to come in third place in the high school division. Image Credit: NASA

Tim White, an instructor at the Huntsville Center for Technology in Huntsville, Ala. -- the 2006 and 2007 high school champions and the second and third place winners in 2008 -- said the competition has been a great project for his students. He continues to hear about the great things former moonbuggy team members are doing.

"I had a girl enter my program as a senior about four years ago because she wanted to participate in the moonbuggy program," White said. "By the end of the school year, she held four credentials with the National Institute for Metalworking Skills and wants to own and operate her own machine shop someday.

"Others have gone on to earn degrees in engineering. Some of those students came back and said the things they learned while designing and building moonbuggies proved to be a great asset while studying to be an engineer."

Teams who participate in the college division of the race agree that the moonbuggy experience prepares today's future engineers for design projects they will face after college in their careers.

Mechanical engineering students from Christian Brothers University in Memphis, Tenn., have competed in the race for eight years. Paul Shiue, professor and the chair of Christian Brothers' Department of Mechanical Engineering, said that the biggest impact on his students is the opportunity to learn from their competitors' designs and to meet the many engineers, scientists and other space industry professionals who come to the race.

"As a result of the competition, students get to know more and more about the opportunities in space industry and develop more interests in this area," Shiue said. "Several former members of Christian Brothers' moonbuggy teams have gone on to pursue master's degrees and work for NASA or other companies in the space industry as a result of contacts made at the race."

The same is true for students at the Rochester Institute of Technology in New York, winners of the college division in 2007. RIT mechanical engineering professor Stephen Boedo, who advises the university's Human Powered Vehicle Team, said his students have learned, through moonbuggy, how to work as a team to accomplish their design objectives and to solve the many unforeseen problems that appear during competition.

"For the first couple of years of competition, our goal was just to finish the course and observe how other teams designed and raced their moonbuggies. In other years, there was always some unforeseen problem with our moonbuggy -- assembly, wheel alignment, chain failure -- and we learned from these failures to simplify our design objectives."

NASA's Marshall Space Flight Center in Huntsville, Ala., organizes the Great Moonbuggy Race. The project supports the agency's goals of attracting and retaining students in science, technology, engineering and mathematics disciplines and strengthening NASA's and the nation's future workforce.