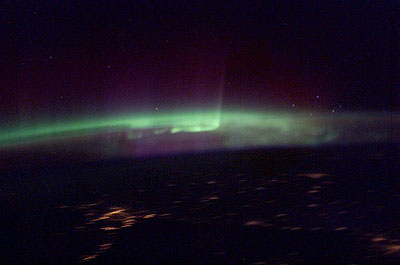 Explanation: Astronauts onboard the International Space Station (ISS) have seen a lot of auroras in recent months. They've even flown through some. Usually the lights are green; sometimes they're red. Other colors are rare. So when ISS science officer Don Pettit looked out the window on March 29th and saw these striking blue-shaded auroras over Scandinavia, he had to grab his camera and take a picture.

Auroras get their colors from different atoms and molecules in Earth's atmosphere. Greens and reds come from atomic oxygen. Blues from molecular nitrogen. Usually, though, nitrogen adds only a hint of blue -- often unnoticeable. What makes these Northern Lights different?

"Perhaps it's because they're sunlit," speculates NASA atmospheric physicist Joe Minow. Off-camera the Sun is setting behind Earth's limb. Although it's dark on the ground below, the tops of these auroras are still illuminated by sunlight. Some of that light is captured by ionized nitrogen molecules (N2+), which are "tuned" by the fundamental constants of nature to absorb light at wavelengths of 391.4 and 427.8 nanometers -- i.e., blue and violet. Blue sunlight absorbed by N2+ is quickly re-emitted in all directions. "We call this process resonant scattering of sunlight," notes Minow. "It may be responsible for much of the blue in this picture."

Sunlit auroras are uncommon, but Minow has seen them before from Alaska. "My wife always put sunlit auroras into a class she calls 'nerd auroras.'" recalls Minow. "They're usually faint and not very impressive compared to the brilliant displays one sees during a major geomagnetic storm. Only auroral physicists would consider them interesting!" he laughs.

In many cases, however, what's dull on Earth looks extraordinary from Earth-orbit. Add sunlit auroras to the list.

Photo Notes: Some stars are visible shining through the auroras. The quartet of stars on the right outline the head of the constellation Delphinus, the dolphin. The stars in the center and left are from the constellation Pegasus. The smudged lights in the foreground are northern European cities. Unlike the distant stars, the nearby city lights are noticeably smeared by the orbital motion of the space station.