astronomer: a scientist who studies the planets, stars and space

Astronomical unit (AU): the average distance from the sun to Earth -- about 93 million miles (149 million kilometers). Earth is 1 AU from the sun.

elliptical: shaped like an ellipse, which is a symmetrical oval where both ends are the same size, like a racetrack

Pluto was discovered in 1930 by U.S. astronomer Clyde Tombaugh. For many years, Pluto was called a planet. It was the smallest planet in the solar system and the ninth planet from the sun.

On average, Pluto is a distance of approximately 39.5 astronomical units, or AU, from the sun. That is almost 40 times farther from the sun than Earth is. Because of its elliptical orbit, Pluto's closest point to the sun is 29.7 AU. This means that Pluto is sometimes closer to the sun than the planet Neptune. Pluto's farthest point away from the sun is 49.7 AU. Pluto is in a region called the Kuiper (KY-per) Belt. The Kuiper Belt is a large band of thousands of small, icy objects that orbit the sun beyond Neptune.

Pluto is only 1,400 miles (2,300 kilometers) wide. That is about half the width of the United States and slightly smaller than Earth's moon. It takes Pluto 248 years to make one revolution around the sun. Pluto takes 6 1/2 days to rotate, so one day on Pluto is about 6 1/2 days on Earth. 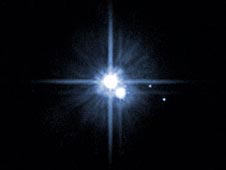 In 2005, this image from NASA's Hubble Space Telescope was used to identify two new moons orbiting Pluto. Pluto is in the center. The moon Charon is just below it. The newly discovered moons, Nix and Hydra, are to the right of Pluto and Charon. Image Credit: NASA, ESA, H. Weaver (JHU/APL), A. Stern (SwRI), and the HST Pluto Companion Search Team
View Larger Image   →

In the same year that it was discovered, an 11-year-old girl from England suggested it be named "Pluto" after the Roman god of the dead.

Pluto has three known moons. Its largest moon, named Charon (KER-ən), is about half the size of Pluto. Astronomers discovered Pluto's two other moons -- Nix and Hydra -- in 2005 using images from NASA's Hubble Space Telescope. Nix and Hydra are very small. Scientists believe the moons are less than 100 miles (160 kilometers) wide.

Why Is Pluto No Longer Called a Planet?

In 2003, U.S. astronomer Mike Brown discovered a new object beyond Pluto. Brown thought he had discovered a new planet because the object, which he named Eris (EER-is), is larger than Pluto.

Pluto also is called a plutoid. A plutoid is a dwarf planet that is farther out in space than the planet Neptune. The three known plutoids are Pluto, Eris and Makemake (MAH-kee-MAH-kee). 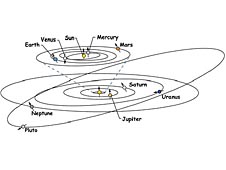 Astronomers continue to study the solar system. They use high-power, ground-based telescopes to discover new objects in space.

Ideas about the universe and Earth's place in it keep changing as scientists get new information. This can cause scientists to rethink what they know and how they classify objects. Scientists are still considering what makes an object a planet as they learn more about the most distant objects in the solar system.

It is very, very cold on Pluto. Scientists believe the temperature on Pluto is 375 to 400 degrees below zero. Pluto is so far away from Earth that scientists know very little about what the surface is like. Because of the cold temperatures, Pluto is probably covered with frost and ice.

Pluto has about one-fifteenth the gravity of Earth. That means a person who weighs 100 pounds on Earth would weigh only 7 pounds on Pluto. 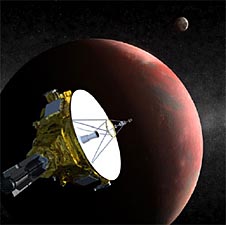 How Is NASA Exploring Pluto Today?

NASA has learned a lot about Pluto from studying images taken by the Hubble Space Telescope. Scientists used Hubble photos to discover the moons Nix and Hydra in 2005. Hubble also has taken pictures of Pluto's surface showing dark and light areas. Even with the powerful Hubble telescope, the images are still fuzzy.

In 2006, NASA launched New Horizons, which is the first mission to Pluto. New Horizons is a spacecraft about the size of a piano that is flying to the outer edge of the solar system. The spacecraft will take nine years to reach Pluto. In 2015, New Horizons will spend more than five months studying Pluto and its moons.

New Horizons has cameras that will take pictures of Pluto. It also has scientific instruments that will gather information about Pluto. These pictures and data will help scientists know more about what Pluto is like. After it has finished studying Pluto and its moons, New Horizons will study objects deeper in the Kuiper Belt.

Why Is NASA Exploring Pluto?

Exploring planets is a historic endeavor and a major focus of NASA. Spacecraft have visited all eight planets in the solar system. Studying Kuiper Belt objects like Pluto may help scientists learn more about how planets form.