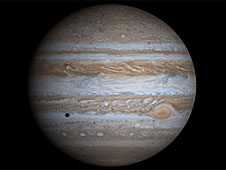 Jupiter is known for its stripes and large red spot. Image Credit: NASA/JPL/University of Arizona

Jupiter is like a star in composition. If Jupiter had been about 80 times more massive, it would have become a star rather than a planet.

Jupiter is the fifth planet from the sun. Jupiter's average distance from the sun is 5.2 astronomical units, or AU. This distance is a little more than five times the distance from Earth to the sun. When viewed from Earth, it is usually the second brightest planet in the sky, after Venus. The planet is named after Jupiter, the king of the Roman gods. 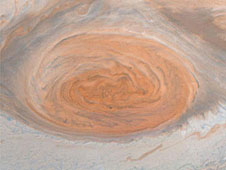 
View Larger Image   →
Jupiter is a giant gas planet. Its atmosphere is made up of mostly hydrogen gas and helium gas, just like the sun. The planet's surface is covered in thick red, brown, yellow and white clouds.

One of Jupiter's most famous features is the Great Red Spot. It is a giant spinning storm, resembling a hurricane. At its widest point, the storm is about three-and-a-half times the diameter of Earth. Jupiter is a very windy planet. Winds range from 192 mph to more than 400 mph.

Jupiter has three thin rings. The rings were discovered in 1979 by NASA's Voyager 1 spacecraft. Jupiter's rings are made up mostly of tiny dust particles.

Jupiter rotates, or spins, faster than any other planet. One rotation equals one day. Jupiter's day is only about 10 hours long. Jupiter's orbit is elliptical, or oval-shaped. It takes 12 Earth years for Jupiter to make one revolution around the sun, so a year on Jupiter is equal to 12 years on Earth.

Words to Know:
Astronomical unit (AU): the average distance from the sun to Earth -- about 149 million kilometers (93 million miles). Earth is 1 AU from the sun.

Magnetic field: the area around a planet that has a magnetic force

Satellite: a natural moon or man-made object that orbits a planet or other object

Evolution: a process of change in a certain direction

Jupiter has an extremely powerful magnetic field, like a giant magnet. Deep under Jupiter's clouds is a huge ocean of liquid metallic hydrogen. As Jupiter spins, the swirling liquid metal ocean creates the strongest magnetic field in the solar system. At the tops of the clouds (tens of thousands of kilometers above where the field is created), Jupiter’s magnetic field is 20 times stronger than the magnetic field on Earth.


How Many Moons Does Jupiter Have? 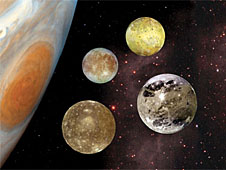 Jupiter's four largest moons (Io, Europa, Ganymede and Callisto) are known as the Galilean satellites because they were discovered by Galileo Galilei in 1610. Image Credit: NASA

Io has many active volcanoes. The volcanoes produce gases containing sulfur. The yellow-orange surface of Io is most likely made of sulfur from the volcanic eruptions. Europa is the smallest of the Galilean satellites. Europa's surface is mostly water ice. Beneath the ice may be an ocean of water or slushy ice. Europa is thought to have twice as much water as Earth.


How Has NASA Explored Jupiter?

Astronomers have used telescopes on Earth to study Jupiter. Galileo Galilei was the first astronomer to observe Jupiter with a telescope, which he used to discover four of its moons. Astronomers also have used telescopes like the Hubble Space Telescope that orbit Earth. NASA has sent eight spacecraft to Jupiter: Pioneer 10, Pioneer-Saturn, Voyager 1, Voyager 2, Ulysses, Galileo, Cassini and New Horizons. (The Ulysses, Cassini and New Horizons missions flew by Jupiter on their way to planets and locations farther in the solar system.) These missions studied Jupiter’s atmosphere, surface, moons and rings. The missions also took close-up images of the planet’s unique features. The first mission to Jupiter was Pioneer 10, launched in 1972. 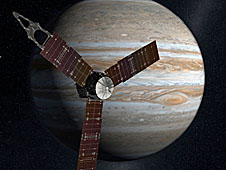 NASA's Juno mission will study how Jupiter, the largest planet in the solar system, formed and became the dynamic world it is today. Image Credit: NASA

A new spacecraft named Juno is on its way to Jupiter. NASA's Juno spacecraft launched in August of 2011 and will arrive at Jupiter in 2016. The goal of Juno is to help scientists better understand the origin and evolution of Jupiter and how planets form.

Juno will orbit closer to Jupiter than any previous spacecraft. It will use Jupiter's magnetic field, gravity field and naturally occurring radio waves to study the mysterious interior of the giant planet. Juno also will take the first pictures of Jupiter's polar regions and study the huge aurora that lights up Jupiter's north and south poles.