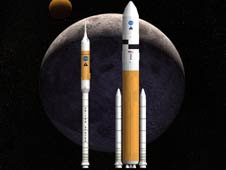 The Ares I and Ares V rockets will help astronauts return to the moon. Image Credit: NASA
View Larger Image 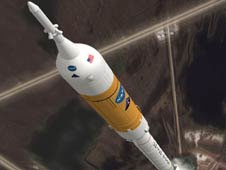 
What Is Ares V?
Ares V (5) is the larger of the two Ares rockets. Ares V will not launch astronauts, but it will play an important role in returning humans to the moon. Ares V will carry equipment into space that will make it possible to create an outpost on the moon. For human landings, the Ares V will launch the astronauts' lunar lander. Astronauts will fly into orbit on an Ares I. The crew's spacecraft will dock in orbit with the lunar lander that is mounted on the top stage of the Ares V. That top stage then will push the Orion and the lander to the moon's orbit. Astronauts will descend to the surface of the moon in the lunar lander. The Ares V could also be used to place other large supplies or spacecraft in space. 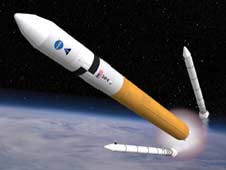 The Ares V will be the most powerful rocket ever flown. Image Credit: NASA
View Larger Image

How Will Ares V Work?
Ares V will be two times bigger than the space shuttle. Like the space shuttle, Ares V will have two solid rocket boosters attached to its side when it launches. They will be similar to the larger solid boosters used as the bottom stage of the Ares I. They will burn for about two minutes after launch, then separate away from the rocket. They fall into the ocean, where they can be recovered. Six liquid-fuel rocket engines also will start at launch. They will be at the bottom of a stage that is like the external fuel tank on the space shuttle. This stage will fire until the fuel is gone, then will drop away. The top stage then will enter Earth orbit. From there, it can propel cargo on the way to the moon. The upper stage uses the same engine as the Ares I upper stage.

When Will the Ares Rockets Fly?
Work already is well underway on the Ares I. The first test flight of an Ares I rocket is scheduled for 2009. Other test flights will follow. Plans are for the Ares I to be used to take astronauts to the International Space Station by 2015. The Ares V is still in a very early stage of development. NASA's goal is to send humans on missions to the moon by 2020.

More about Ares
What Is Altair?
What Is Orion?