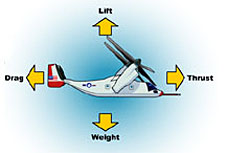 The four forces of flight help an object move through the air. Image Credit: NASA


What Are the Four Forces of Flight?
The four forces of flight are lift, weight, thrust and drag. These forces make an object move up and down, and faster or slower. The amount of each force compared to its opposing force determines how an object moves through the air. 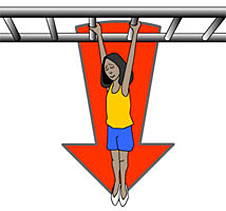 What Is Weight?
Gravity is a force that pulls everything down to Earth. Weight is the amount of gravity multiplied by the mass of an object. Weight is also the downward force that an aircraft must overcome to fly. A kite has less mass and therefore less weight to overcome than a jumbo jet, but they both need the same thing in order to fly -- lift.

What Is Lift?
Lift is the push that lets something move up. It is the force that is the opposite of weight. Everything that flies must have lift. For an aircraft to move upward, it must have more lift than weight. A hot air balloon has lift because the hot air inside is lighter than the air around it. Hot air rises and carries the balloon with it. A helicopter's lift comes from the rotor blades. Their motion through the air moves the helicopter upward. Lift for an airplane comes from its wings.

How Do an Airplane's Wings Provide Lift?
The shape of an airplane's wings is what makes it possible for the airplane to fly. Airplanes' wings are curved on top and flatter on the bottom. That shape makes air flow over the top faster than under the bottom. As a result, less air pressure is on top of the wing. This lower pressure makes the wing, and the airplane it's attached to, move up. Using curves to affect air pressure is a trick used on many aircraft. Helicopter rotor blades use this curved shape. Lift for kites also comes from a curved shape. Even sailboats use this curved shape. A boat's sail is like a wing. That's what makes the sailboat move.

As an object moves through the air, it pushes aside air molecules. Image Credit: NASA

What Is Drag?
Drag is a force that pulls back on something trying to move. Drag provides resistance, making it hard to move. For example, it is more difficult to walk or run through water than through air. Water causes more drag than air. The shape of an object also affects the amount of drag. Round surfaces usually have less drag than flat ones. Narrow surfaces usually have less drag than wide ones. The more air that hits a surface, the more the drag the air produces.

Thrust is the force that moves an aircraft forward. Image Credit: NASA

What Is Thrust?
Thrust is the force that is the opposite of drag. It is the push that moves something forward. For an aircraft to keep moving forward, it must have more thrust than drag. A small airplane might get its thrust from a propeller. A larger airplane might get its thrust from jet engines. A glider does not have thrust. It can only fly until the drag causes it to slow down and land.

All images are from screenshots taken from the Future Flight Design Web site:
http://futureflight.arc.nasa.gov/   →