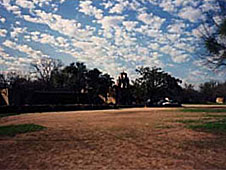 Clouds can form rows in the sky. Image Credit: NASA


View Larger Image   →
A cloud is a mass of water drops or ice crystals suspended in the atmosphere. Clouds form when water condenses in the sky. The condensation lets us see the water vapor. There are many different types of clouds. Clouds are an important part of Earth’s weather and climate.


How Do Clouds Form?

Clouds form from water in the sky. The water may evaporate from the ground or move from other areas. Water vapor is always in the sky in some amount but is invisible. Clouds form when an area of air becomes cooler until the water vapor there condenses to liquid form. At that point, the air is said to be "saturated" with water vapor. The air where the cloud forms must be cool enough for the water vapor to condense. The water will condense around things like dust, ice or sea salt -- all known as condensation nuclei. The temperature, wind and other conditions where a cloud forms determine what type of cloud it will be. 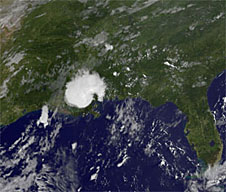 
View Larger Image   →
What Are Some Types of Clouds?

Clouds are categorized primarily by two major factors -- location and shape. High clouds form several kilometers up in the sky, with the exact height depending on the temperatures where they form. Low clouds generally form within a kilometer or two of Earth's surface. In fact, low clouds can even form touching the ground, when they are called fog. Middle-level clouds form between low and high clouds.

Cirrus clouds are thin and wispy and often curve with the wind. Cumulus clouds tend to be big and fluffy. These clouds look kind of like giant cotton balls or other shapes in the sky. As a middle-level cloud, this type also can form parallel stripes of clouds. Stratus clouds form sheets of clouds that cover the sky.

Words to Know
evaporate: to change from a liquid to a gas, or vapor, at a temperature below the boiling point

condense: to change from a gas, or vapor, to a liquid

parallel: extending in the same direction, everywhere equidistant, and not meeting

ammonia: a colorless gas that is a compound of nitrogen and hydrogen, has a sharp smell and taste with a chemical symbol of NH3


Most of the water in clouds is in very small droplets, but sometimes those droplets collect more water. Then they turn into larger drops. When that happens, gravity causes them to fall through the air faster. The falling water drops are rain. When it is colder, the water may form snowflakes instead. Clouds also can cause freezing rain or sleet. These happen when snow melts on the way to ground but then gets colder again. Hail falls during more severe weather. Air currents cause rain and snow to move around in the sky. As they move, they get colder and turn into ice. As they move, the ice chunks get bigger. Finally, they fall to the ground as hail.


Why Does NASA Study Clouds?

Clouds are important for many reasons. Precipitation, like rain or snow, is one of those reasons. At night, clouds reflect heat back to the surface and keep it warmer. During the day, clouds can shade us from the sun and keep Earth cooler. Studying clouds helps NASA better understand Earth's weather and climate. NASA uses satellites in space as well as computers to study clouds. 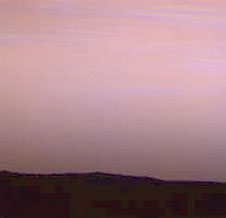 The Pathfinder mission took this picture of clouds in the sky over Mars. Image Credit: NASA