Grow Text SizeShrink Text Size
What Does it Smell Like in Space?

"That which we call a rose, by any other name would smell as sweet." What Shakespeare was saying was -- you can change the name of a rose but you can't do anything about its smell. Maybe, that isn't really true.

What if a rose bloomed in space? Would it have the same "rosy" aroma? Scientists at NASA are working with the perfume company International Flavors and Fragrances (IFF) and the Wisconsin Center for Space Automation and Robotics (WCSAR) to study the question.

Light is another factor that causes a flower to make certain oils. A flower might make more or less of certain oils depending on when it's producing pollen. Temperature, moisture in the air, and the age of a flower will also affect the oils a flower makes. Since flowers have the ability to create more or less of any of its oils, its fragrance can change as a result.

Scientists for IFF began to wonder if flowers would have the same aromas in space as they do on Earth. Maybe some exciting things could be discovered if flowers were allowed to bloom in space. That's exactly what happened aboard Discovery STS-95 in October of 1998. 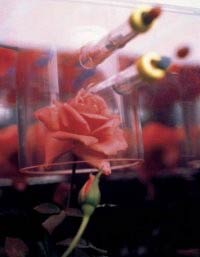 Image to left: This miniature rose called "Overnight Scentsation" was cultivated by IFF for experiments in space.

The flower that flew on STS-95 was a miniature rose called "Overnight Scentsation." It was just seven inches high and had two small buds just ready to open. The plant had to be small in order to fit into ASTROCULTURE™, which is a 17 by 9 by 21 inch chamber specially designed to maintain the right conditions. 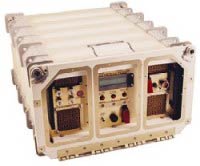 Astronauts didn't test the aroma of the roses by sniffing them. They actually took samples of the oils. They used a special wand to touch the roses. Some of the oil drops stuck to the wand. This was repeated four times during the mission. After the shuttle returned to Earth, the wands were taken to IFF.

IFF scientists then studied the "aroma" oils on the wands. They found that the roses actually made fewer oils while in space. However, they also found the space roses had more "floral rose aroma" than the same roses on Earth. It's no wonder that this happened. Low gravity was part of the flower's environment. Environment affects a flower's make up and growth.

Now, what will IFF do with the results of this experiment? Since they know what oils are in fragrances and the amounts of each one, they can make the same ones in their lab. They can make new fragrances that are nicer, sweeter, longer lasting, or any factor they wish to make better.

Image to left: Use of a wand to collect essential oils from a rose.

The ability to do this type of research in space is part of NASA's cooperative program of Commercial Space Centers. A Commercial Space Center (CSC) helps companies research new products in space. There are 15 CSC centers around the country, each of which is working hard to help America's industries produce new and better products.