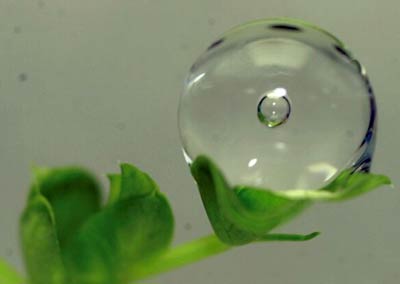 Explanation: It could only happen in space: A tiny bubble of air hangs suspended inside a droplet of water. The droplet rests in the cup of a delicate green leaf, yet the stalk doesn't bend at all.

Cosmonaut Nikolai Budarin photographed this scene on April 9, 2003. He was peering into the Russian Lada greenhouse onboard the International Space Station (ISS), and his snapshot illustrates some of the strange physics of gardening in space.

First, consider what would happen on Earth: The air bubble, lighter than water, would race upward to burst through the surface of the droplet. Meanwhile, the leaf would be busy tipping the heavy water onto the floor below. Everything would be in motion, the picture a blur.

In Earth-orbit, though, the scene is truly motionless. The air bubble doesn't rise because it is no lighter than the water around it -- there's no buoyancy. The droplet doesn't fall from the leaf because there's no force to pull it off. It's stuck there by molecular adhesion.

Sticky water. No buoyancy. These are some of the factors spacefarers must take into account when they plan their gardens. Suppose Budarin sprays water onto the base of the plant. Will it trickle down to the roots? More likely it will stick to the stem or adhere the substrate in which the plant grows. And what happens to oxygen emitted by plants? Without buoyancy to stir things up, air circulation can be poor. Oxygen lingers. It doesn't waft away to make room for the carbon dioxide plants need. A plant can actually suffocate in its own emissions!

Nevertheless, plants can flourish in spaceships. Recent experiments onboard the ISS prove it.

Related Information: http://science.nasa.gov/headlines/y2001/ast09apr_1.htm
› Back To Top