The Quest for Answers 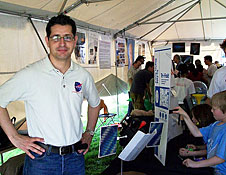 Mehdi Benna is an engineer at NASA's Goddard Space Flight Center. He visited the University of Maryland Science Fair to judge entries and speak with students. Image Credit: NASA

How did the solar system form? How has it evolved since its beginning?

Mehdi Benna asked many questions about outer space when he was young. Benna was fascinated with everything related to space. His mother, a physics teacher, encouraged his interests. Physics is the study of forces and motion. He often looked at the pictures in her students' books.

But some of Benna's questions were never answered -- at least, not in enough detail.

Benna wanted to find those answers. He hoped to work on the problems faced by planetary scientists. In college, Benna studied engineering. He looked for ways to apply what he knew to space.

Now he gets to search for those answers every day working at NASA's Goddard Space Flight Center in Greenbelt, Maryland. "I enjoy the endless scientific problems that I encounter. It seems like every day brings new challenges and puzzles to solve," Benna says. 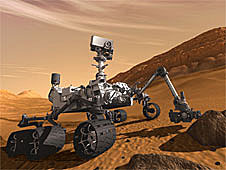 Currently, Benna is learning about parts of the solar system with the instruments that he helps to develop for spacecraft. Because of his instruments, he and other scientists are learning about Mars, the moon and Mercury. He helped develop the Sample Analysis at Mars, or SAM, instrument. It is part of the Mars Science Laboratory rover named Curiosity. SAM will help analyze gases and solids on Mars when Curiosity lands in August 2012.

Benna is working on two instruments that will be used on the LADEE (Lunar Atmosphere and Dust Environment Explorer) and MAVEN (Mars Atmosphere and Volatile EvolutioN) spacecraft. The instruments will help study the very thin atmospheres of the moon and of Mars. LADEE will go to the moon. MAVEN will study Mars. Benna is also part of NASA's MESSENGER team, which is investigating the planet Mercury. He hopes all his work will advance the understanding of our solar system. 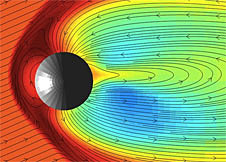 Benna's work constantly leads him to new questions. He thinks it is important that we never stop asking them: "Most great discoveries were triggered by simple but profound questions."