Adams, who studies the sun's turbulent behavior for NASA, is no sorceress. She also is director of the Von Braun Planetarium in Huntsville, where she uses a star-projector and the sprawling planetarium dome to lead middle- and high-school science classes, home-school groups and other visitors on simulated tours of the cosmos itself. 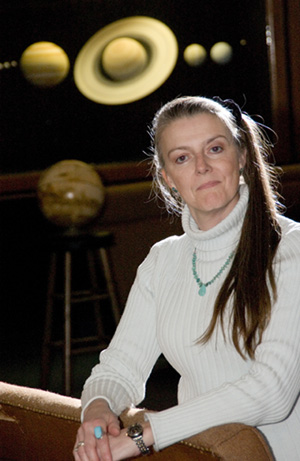 Before long, even the chattiest teens and distracted adults fall silent, eyes cast upward in wonder.

Happens every time, Adams says. "It's easy to forget that our busy little planet is part of a solar system, a galaxy and an unbelievably complex universe."

An Atlanta native, Adams was fascinated by those relationships even as a child. She recalls how the night sky, usually smudged black by city lights, became a breathtaking starscape when her family vacationed in rural settings. Those stars became her passion.

She earned a bachelor's degree in physics in 1987 from Georgia State University in Atlanta, and joined NASA as an astronomer the following year.

In her 18-year career at the Marshall Center, she has conducted research for a variety of missions focused on the sun and other stars. These include the "Solar Maximum" satellite, which orbited Earth from 1980 to 1989, studying the sun during the most active portion of its 11-year solar cycle; and the Ramaty High Energy Solar Spectroscopic Imager, named for the late NASA astrophysicist Reuven Ramaty and launched in 2002 to study solar flares. Adams continued her education at the University of Alabama in Huntsville, where she earned her master's degree in physics in 1991.

Adams still studies the sun today, from her office at the National Space Science and Technology Center in Huntsville. She monitors sunspots, solar flares and the titanic blasts of radiation known as coronal mass ejections, which can threaten satellites in Earth orbit and interfere with commercial air traffic and ground-based electrical systems.

In an age that relies so heavily on complex power grids and orbiting satellites, Adams says, it's vitally important to understand these solar explosions and seek new defensive strategies. Moreover, as NASA prepares to send human explorers to the moon and beyond in coming decades, new insight into solar activity will help protect vehicles and crews from intense solar radiation.

For Adams, nurturing new ranks of solar scientists to continue the work is part of the solution -- hence her dedication to all those upturned faces at the planetarium. She also leads teacher workshops at NASA's Educator Resource Center in Huntsville. She visits local schools to inspire young people to consider careers in physics and astronomy. In 2005, she and fellow Marshall scientist Dennis Gallagher created an after-school program to keep disadvantaged middle-school students in school, and fire them up about math and science. Adams even tutors students on her own time.

Adams stays involved at the college level, as well. She is a regular guest lecturer in science courses at the University of Alabama in Huntsville. This term, she led several sessions of "Theories of the Universe," a class that explores how various cultures perceive the cosmos. She led discussion of the astronomy-savvy Maya and Inca civilizations of Central and South America, respectively. She's well-versed in the subject matter -- and not just the astronomy. An accomplished hiker and an avid student of ancient cultures, Adams has repeatedly vacationed in Peru and Guatemala to visit the ruins of these lost empires.

"That’s what’s great about astronomy as a career," she says. "It's a fascinating blend of sciences -- physics, chemistry, geology, history, mathematics -- that keeps it new and exciting and more relevant now than ever to our everyday lives."