Maps and satellite images are a big part of learning about Earth and space science. Can you imagine not being able to see a picture of a hurricane, Jupiter's Red Spot or a simple weather map? 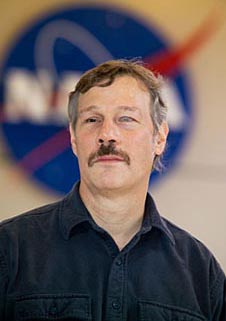 Seeing well isn't possible for students who are blind or visually impaired. Nearly 100,000 such students live in the United States, according to the National Federation of the Blind.

NASA's Robert Shelton knows how hard school can be for students who have trouble seeing. He lost most of his eyesight at age 11. But that didn't stop him from being interested in science and mathematics.

"I had always been good at science and math. The loss of my vision served as a wake-up call that I should maybe get a whole lot more serious about my education," Shelton said. "I was incredibly fortunate that the people around me -- parents, teachers, counselors -- saw science and math as stepping stones for me as opposed to stumbling blocks."

Shelton used to be a college math professor. More recently, he directed the NASA Learning Technologies team at NASA's Johnson Space Center in Houston. The team develops computer programs that make it easier for students with vision loss to continue studying science and math. The programs also give students a different way of looking at these complex subjects.

Earth+ is the most recent computer program Shelton's team has created. Earth+ assigns different colors on a map or satellite image to different sounds. A person hears these sounds as he or she moves the cursor across the graphic.

For example, a blind person viewing an image of a hurricane in Earth+ would hear one sound when moving the cursor over white clouds, another sound over blue water and still another over brown land. The sounds help people who are blind or visually impaired create a mental picture of the map or image.

Earth+ offers two ways to explore a graphic. "If you use the cursor keys, you can be extremely accurate, down to the pixel -- perfect for exploring small features," Shelton said. "Using the mouse allows you to sweep over vast areas to get an idea of large general features such as land masses."

But many times a tactile version of a map is not available. That's where Earth+ comes in handy. "Earth+ doesn't replace tactile," Shelton said. "It supplements it with content which cannot be anticipated in advance, such as a hurricane that might be churning through the Caribbean right now." 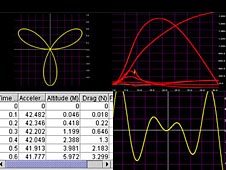 MathTrax is another tool Shelton and his team developed. MathTrax is a computer program that works like a graphing calculator. The program graphs mathematical equations, then describes them with sounds and words.

With the help of tools such as Earth+ and MathTrax, Shelton says that many blind and visually impaired students can excel in science and math.

"Many disabled people develop exceptional problem-solving skills just to cope with the challenges of ordinary life. In the world of science, the crucial insight often is simply to look at the same information from a new angle," Shelton said. "People who deal with a disability on a daily basis may just take that slightly different approach that proves to be the key."