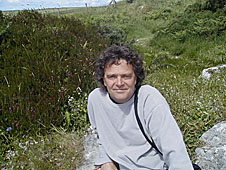 Chris Justice is a geographer who studies fires around the world. Image Credit: Luigi Boschetti

Chris Justice had been interested in the landscape of the English countryside and the world around him as he grew up. But he remembers, "When I went to college, I was really not in the physical sciences at all. I was in the arts."

Then one of his professors encouraged Justice to study physical geography. Physical geography is the study of the features of Earth's solid surface, oceans and climate, as well as the distribution of plants and animals. To do what his professor had suggested, Justice had to take more science courses to "catch up." He then studied the geography of natural resources using aerial photographs.

After he had received his first degree from college, Justice continued to study physical geography in graduate school. There, he saw the first satellite photos taken by the Landsat satellite system. The Landsat photos covered much larger areas of Earth's surface than the photos from airplanes that geographers had been using.

Justice helped develop new ways to analyze digital satellite photos. Instead of looking at one image at a time to gather information, scientists could now look at several images together. Now they could observe how the land changed from season to season. 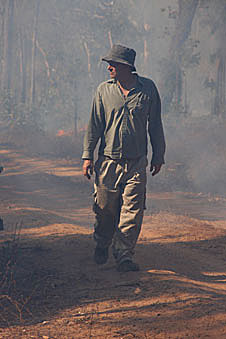 For the past decade, Justice and other NASA scientists have been making careful measurements of fire, vegetation, snow and ice across the globe. Justice has focused on global fires. His research began after some of his coworkers started investigating fires in the area of the Amazon River in South America. They were looking at how fires might indicate human activity.

Since then, Justice and his coworkers have used satellites to keep records of fires around the world. They are especially interested in looking at the effects that fires have on landscapes. They study how humans interact with nature.

In October 2011, NASA launched its latest Earth observation satellite. The satellite contains an instrument that will help scientists continue to collect data about Earth's surface. This data is important because the climate is changing. The way humans are interacting with their environment is changing too. Scientists are no longer observing only the physical changes. They are looking at the ways humans interact with their environments as well. Justice says that is really an important area for research.

Justice hopes his research will make a difference by helping people make better choices. He says people need to understand how to "better manage Earth's resources and live in a more sustainable way." To do that, they first must see that the way they themselves are using those natural resources affects Earth.