The elementary school student wondering how El Niño will affect tomorrow's weather. The scientist studying connections between ozone and climate change. And the farmer using satellite pictures to keep track of crops. All of these people are Earth Explorers -- they are all curious about the Earth system. This monthly series will introduce you to NASA Earth Explorers, young and old, with many backgrounds and interests.

Marci Delaney hosts a video that teaches proportion to find the size of the moon. The video stars Wall-E and is available on the NASA Web site. Image Credit: NASA

Marcianna Delaney remembers the moment when she realized she wanted to become a scientist. She was 13, cruising along the Maine coast on a boat owned by family friends.

"I sat on the bow of that boat while sailing through Penobscot Bay and witnessed some of the most beautiful creatures I had ever seen," Delaney said. "That was it. I wanted to be a marine biologist."

Delaney's father, a former physicist, encouraged her to follow her passion. So did a physicist friend who gave her advice along the way. Later, Delaney studied marine biology in college. In graduate school, she discovered her love for explaining science.

"From that point forward, I set my eyes on looking for positions in science education," Delaney said.

"Earth and space scientists are always making new discoveries," Delaney said. "We want students to understand how we do that job." 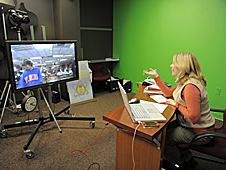 Marci Delaney interacts with students during a teleconference. Events like this one allow teachers to use technology to bring NASA into the classroom. Image Credit: NASA

One of the DLN episodes is hosted by WALL-E, the robot character from Disney/Pixar's movie. Delaney worked hard to make this episode possible. The robot helps teach about the Lunar Reconnaissance Orbiter, or LRO, NASA's satellite mission to the moon.

The episode includes a hands-on activity about LIDAR, which stands for "Light Detection and Ranging." LIDAR is a technology that uses lasers to calculate the distance to an object or surface. The Lunar Reconnaissance Orbiter is using LIDAR to map the topography of the moon. Topography is the height or depth and shape of objects. LIDAR will help NASA scientists make 3-D maps of the moon.

Delaney says that technology such as that used by the DLN has allowed students to become more involved in learning. This process helps students overcome what Delaney says is their biggest challenge -- getting past the idea that science is hard.

"Science is fun. Science is everywhere. Science allows us to satisfy our endless curiosity. Science is meant for everyone. Girls are allowed in this club," Delaney said. "(The) only way students of today can overcome this challenge is to believe it is possible."