Sand moves? Yes, it does. James Jenkins, a professor at Cornell University is trying to understand moving sand. He tells us, "Moving sand dunes are an example of granular flow -- a poorly understood branch of physics."

Can you see sand move? Next time you are at a beach, go to the top of a little sand hill, called a dune. Take off your shoes and socks and stand on the windy side. You'll feel little grains of sand hitting your ankles. The wind is lifting the sand up and moving it.

Now, step to the other side of the dune. Notice how still the air is on that side. Get down on your hands and knees and watch the sand as it is lifted into the air from the windy side and dropped down on the other side. This goes on 24 hours a day, 365 days a year.

This movement of sand can make a big difference over the year's time. Some countries have big problems with moving sand. They have tried many ways to stop the movement, from pouring oil on it to building fancy fences. 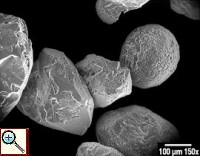 Imagine a little grain of sand. Each grain is different from all the other grains. Each one is touching many others around it. As a grain moves, it is always changing the grains it touches. Its movement depends on how all the grains bump and slide on each other as they move. Scientists don't have an equation that would have all the possible ways grains can hit each other.

James Jenkins and his co-workers, however, are trying to create such an equation. There are three major things for them to think about -- saltation, sheet flows, and avalanches.

A new NASA shuttle mission will carry small piles of sand into space to see how the grains move with each other in low gravity. Hopefully, the information learned from this will help earthquake engineers, farmers and physicists. NASA cares about the movement of sand too. It's all part of NASA's mission to understand and protect our home planet. Working together, we might be able to stop the ever-creeping sand. 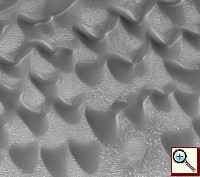