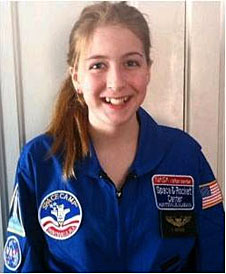 Astronaut Abby doesn't just talk about wanting to be something -- she's set out to make her dreams happen. Image Credit: NASA

A different kind of blog appeared on the NASA website a few weeks ago. The blog was posted under the NASA Missions area called A Lab Aloft (International Space Station Research) and was titled "Meet a Teen with Space Dreams."

The post was written by a 14-year-old aspiring astronaut who goes by the name Astronaut Abby. If you saw that post, you may have thought something along the lines of ... "Seriously, how did this girl get to do this for NASA?!?!"

We know lots of students dream of becoming astronauts. Others dream of working at NASA as engineers or scientists. And then there are those students that don't care what or how they get to NASA -- they just want to get there.

But to "get to NASA" as a teenager? Or to be a guest blogger at NASA?? How do you do that? The answer is this: You love learning; you find a passion and set goals; and you work to make those goals happen.

Love Learning
Meet 14-year-old Abby Harrison. A freshman in Minneapolis, Minn., Abby first and foremost loves learning. She doesn't take just the typical high school curriculum; she adds electives such as Chinese and engineering design. Then she adds a little extra on top. In the evenings, Abby takes online chemistry and Algebra II -- this is all on top of her regular course load. Over the summer, Abby likely will be taking pre-calculus and a second semester of physics. She also has applied to a Chinese immersion camp through one of the colleges in Minnesota.

Abby's teachers know she loves to learn, so they bring her books on different topics. And not just her teachers inspire her. Her three best friends also love learning, and they have supported and cheered her on as she pursues her dreams. Abby and her friends carry their love for learning into their conversations; you might overhear them discussing ideas on scientific theories, or different ways to build a robot, or what they love about science.

So first and foremost, you must love learning.

Find a Passion and Set Goals
Like a lot of students, Abby has always loved space. Since she was a little girl, around the age of 6, she has talked about her dream to be an astronaut. One day, when she was 11, Abby was talking to her mother about the dream. So Abby's mother encouraged her to do a Web search to find out what it takes to become an astronaut. After a few months of research, Abby returned with two options on how to become an astronaut. She outlined the choices to her mom. Abby declared that she wanted to go to the Air Force Academy to become a pilot and then apply to NASA, versus going the civilian route. Her desire to be a pilot stems from her dream to go to Mars one day and the need for multiple pilots to be on a mission to Mars.


Once Abby made up her mind and decided on her path, her goals were to experience and learn as much as possible about NASA. One thing Abby did was to take part in an education downlink. Being able to interact with the astronauts while they were in space and watching the other students react with awe at speaking to the astronauts had a big impact on Abby. It made her desire to be an astronaut even stronger.


For an optional History Day project, Abby chose the topic "Debate and Diplomacy: The Development of the ISS." As part of her research, she set up a Twitter account and began to follow some of the many NASA people on Twitter. She has followed not only NASA astronauts but also different employees within NASA, many of whom are scientists and engineers. Abby found that interacting with people on Twitter opened a door into the world of NASA without ever having to leave her home.


Abby also started her blog as a part of the History Day project. On it, she shares not only her passion for becoming an astronaut but also writes about various space-related issues and experiences related to NASA.


The Twitter account and the blog were part of Abby's way to show and share her passion for becoming an astronaut. But how do these things translate into setting goals? Through these activities, Abby was able to reach out and interact very directly with different people at NASA. She was able to share her love of all things NASA with them and to gain their support by allowing them to see how dedicated she was to her studies and her goals. 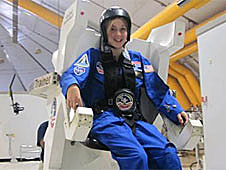 One of Abby's goals is to attend the two-week advanced course at Space Camp next summer. Image Credit: NASA

Make Your Goals Happen
You know that Abby has a blog, that she wrote a blog for NASA, and that she interacts with NASA people on Twitter. But what else has happened with Abby and NASA?

One thing Abby did was attend Space Camp for one week during the spring of 2010 with a school program called Reach for the Stars. It takes over 50 students each year from Minneapolis to the camp. Abby loved the experience of learning about spaceflight so much, she teamed with her three best friends and came back the summer of 2011. To raise the money for the second visit to Space Camp, the girls babysat, had bake sales, did garage sales and held car washes. It was hard work and took time away from other things, but Abby and her friends had a goal.

Another thing Abby got to do was attend what's called a Tweetup. While the space shuttle was still flying, NASA and the Canadian Space Agency would hold what’s called Tweetups where people on Twitter could try to win a spot at the shuttle launches so they could Tweet about the experience.

Abby and her mother won a spot to attend the launch of STS-134 at NASA's Kennedy Space Center in Florida. At the Tweetup, Abby met many people who were part of the Tweetup, including some astronauts and people from the European Space Agency.

After the STS-134 Tweetup and launch, Abby and her mom won a spot to attend the Canadian Space Agency's Tweetup for the very last shuttle mission, STS-135. Abby knew NASA works very closely with other space agencies around the world, and this event was an opportunity she could not pass up. Abby and her mom got a full day tour of the Canadian Space Agency; they met scientists, engineers and astronauts. Abby even had her picture take by some other Tweetup members who said they wanted a picture with the future first astronaut to go to Mars.


For the upcoming year, Abby plans to return to Space Camp to attend the two-week advanced course. Abby is working with and mentoring girls in the Girls Excelling in Math and Science organization that helps to inspire girls to become scientists. A past participant in the program, Abby knows the value of mentoring young girls. Abby also participates with her high school gymnastics and track teams to be physically fit.

Maybe you dream of becoming a NASA astronaut. Maybe you dream of being an engineer or a scientist at NASA. Whatever your dream is, you're never too young to start pursuing it. Follow Abby's example in studying, learning and not being afraid to set goals. Challenge yourself to reach further and to push yourself beyond what you're used to. Find your passion, study as much as you can, and go for it.