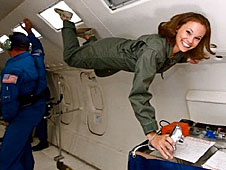 Emily Calandrelli has floated like astronauts do in space. She has searched for life on Mars and gone to the middle of the desert. And she has helped write four published research papers.

In 2009 alone, she was named to a USA Today all-star academic team and earned two scholarships. She was also voted West Virginia University's Ms. Mountaineer for her academic work and extracurricular activities.

That is not a bad resume, especially since Calandrelli is only a senior in college.

Calandrelli has long had a passion for space. She is drawn to the challenge of space exploration and its benefits.

"I've always been in love with the stars and view the cosmos as the ultimate adventure," Calandrelli said. "Because of technologies from space exploration, we can begin to understand our world's origins, and our lives are improving. These are the reasons why dedicating a life to the sciences and space exploration is so meaningful and rewarding."

Calandrelli has worked on several NASA-related projects during her college years. She has used lasers as part of research to reduce harmful emissions from jet engines. She has developed nanowires for use in chemical detection sensors. (Nanowires are incredibly thin wire-like structures.) And she has studied the effect of gravity on different fluids, such as water and oil.

What's been the most interesting NASA project? Calandrelli points to a project that involved designing a simulation of a Mars soil testing experiment.

"We had the opportunity to work with the Phoenix Lander science team and were all able to get our hands dirty," Calandrelli said. The Phoenix Mars Lander is a NASA spacecraft that landed on the Red Planet in May 2008 to study the history of water and potential for life on the planet.

Several times, Calandrelli has presented her research to NASA engineers and scientists. What advice does she have for students who may get nervous about public speaking?

"The best advice is to practice your presentation so much that you could do it in your sleep," Calandrelli said. "When you are nervous, it becomes difficult to recall information and improvise. But if you have practiced so many times that you don’t even need to think about it, you should be fine."

Calandrelli helps make sure that other students have the same opportunities she has had to explore space. She and other West Virginia University students started the Student Partnership for the Advancement of Cosmic Exploration, or SPACE. The group provides college students with information on space exploration activities and how to get financial aid. Members of SPACE also talk to students and the public about the benefits of space exploration.

One point that Calandrelli stresses when she speaks to students is the importance of science, technology, engineering and mathematics, or STEM. It was an interest in mathematics and science during high school that led her to choose an engineering major in college.

"I tell students that I believe STEM majors have the most exciting opportunities than any other majors in college," Calandrelli said. "Because of engineering, I have been able to experience things I never thought I would be able to do as an undergraduate.

"I especially encourage females to get involved in these majors because we are in the minority (in these fields), and that needs to change. STEM majors come with challenges and exciting opportunities, and women should not be discouraged or intimidated because they think it is a 'guy major.'"