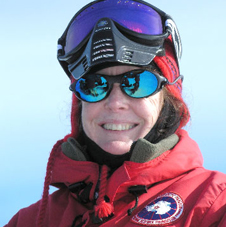 Lucy McFadden is a scientist with NASA's Dawn mission. Dawn is a spacecraft on its way to study asteroids between Mars and Jupiter. Asteroids are rocky objects in space that are too small to be called planets. Small pieces of asteroids that have fallen to Earth are called meteorites. McFadden talks about her experiences in the following article.

Antarctica is the fifth largest of the world's seven continents. It sits over the South Pole and is covered by ice. Antarctica spans 14 million square kilometers (5.4 million square miles), or about half the size of the United States.

It was more than 25 years ago that I first heard about scientists searching for meteorites in Antarctica. I knew then that I wanted to search for meteorites myself some day.

Meteorites are chunks of rock that have fallen to Earth from space. These rocks can tell us about the early days of the solar system. Most are over 4 billion years old. Antarctica is a good place to find meteorites because the wind blows the snow and ice off of them. This makes it easy to see them against the white snow.

A program funded by the U.S. National Science Foundation began searching for meteorites in Antarctica in 1976. It has continued to do so almost every year since. I felt lucky to have been invited to participate in the program's 2007-2008 season. 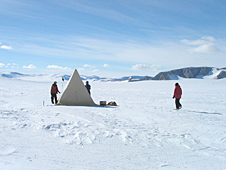 The meteorite-hunting team slept in tents during the mission. Image Credit: NASA

My 10-week break from my daily work at the University of Maryland's Department of Astronomy began the day after Thanksgiving 2007. I flew to Los Angeles to meet up with six other members of the search team. We then flew to New Zealand to meet up with more participants, and then to Antarctica.

We spent one week at McMurdo Station, a science research center, training and preparing for our search season. We were then flown with our snowmobiles and gear to a glacier. After landing, we unloaded and drove our snowmobiles to the area that would be our home base, about 15 minutes away.

Once our tents were set up, we immediately chipped some ice, went into our tents, started our stove to melt ice, and made a hot drink to warm up. It was very cold outside even though it was Antarctic summer.

The extreme cold with high winds can be dangerous. But our tents protected us from the wind. The stove kept us warm. There was plenty of fresh water once the ice melted. And we brought plenty of food with us. We cooked all of our meals in our tents, which we shared with one other person. 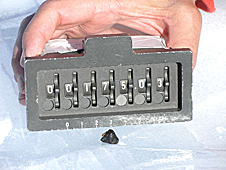 The meteorites the team found were collected and sent to Johnson Space Center for scientists to study them. Image Credit: NASA

Once cozy in the tent, it was time for a meal and then some sleep. I had no idea that we would spend the next two days in our tent because of bad weather. The temperature got as low as minus 23 degrees Celsius (minus 9 degrees Fahrenheit), and the winds were estimated at 30-40 mph. The tent poles creaked in the wind. Luckily, the tents were designed to withstand winds over 100 mph.

Eventually, the winds died down. But a lot of our gear was buried in snow. So we had to dig out. We were well-rested and ready to start our search for meteorites.

Upon discovering a meteorite, we would give it a number and photograph it. We would also make an entry in a notebook noting the meteorite's size and the amount of thin, glassy coating called fusion crust. Picking it up with tongs, we'd place it in a bag with a number tag and tape it closed. We'd record the location of the find with a global positioning, or GPS, device. And we'd leave a flag with the meteorite's number on it just in case we had to return to the location.

Sometimes we would spend an hour in one place finding many meteorites. It often looked like a nest of them.

Over the course of our six-and-a-half-week stay, planes flew into our camp twice to bring food, mail and fuel. We used the fuel both to heat our tents and to power the snowmobiles we used to get around. The planes also brought new parts for some of the snowmobiles, which would sometimes break down. And they carried out our garbage. 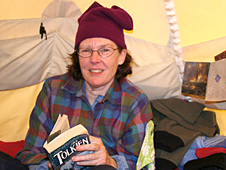 During times of bad weather, we wrote in our journals and read books. We also played cards, listened to music and cooked yummy meals. And we enjoyed the presents and Christmas decorations sent by our families and co-workers.

We had 22 full days and eight half-days of searching for meteorites. We found 710 meteorites. Some were as small as a little fingernail. Others were about eight pounds and too big to hold in one hand. We all found the hunt very exciting.

The meteorites were shipped to NASA's Johnson Space Center in Texas. There, they are organized and stored. Then they are described in a newsletter for scientists who can request samples for study. Scientists then perform measurements, report results at meetings, and write their findings in journals. Their research is reviewed by other scientists for accuracy and clarity.

Antarctica is a beautiful place. It was a privilege and an adventure being there -- not to mention a dream come true. On the other hand, it was a lonely place and I missed my family, friends and colleagues.

It was a unique experience. I am pleased to have supported research that helps us better understand the early solar system by studying these remnants from the past.

Written by Lucy McFadden
This information was adapted for the 5-8 grade levels by Dan Stillman, Institute for Global Environmental Strategies.
› Back To Top