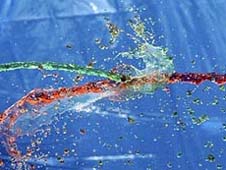 Robert L. Ford School in Lynn, Mass., is one of 20 NASA Explorer Schools that designed an experiment that was conducted on a reduced-gravity flight. Teachers ran the experiments on NASA's "Weightless Wonder" aircraft. The aircraft flies in a roller-coaster-like path. When the plane climbs up, passengers can feel almost twice as heavy. Then the plane descends toward the Earth, letting passengers experience weightlessness. This process is repeated multiple times during the flight.

The eighth-grade students from Robert L. Ford School wanted to know how water droplets react in reduced gravity, like in space. Do they bounce off each other, merge into one large water droplet, or break into many smaller water droplets?

Students first did the experiment at their school. They squirted streams of green water toward streams of red water to watch how the streams collided. Students then recorded their observations. The streams of water both merged and bounced off each other, splashing into many small drops of water. Students wondered if the water would behave the same way when there is very little gravity.

To do the water collision experiment on NASA's Weightless Wonder, students built a collision chamber. Inside the chamber, two nozzles sprayed streams of water toward each other. Pumps controlled how much water and how fast it sprayed. Cameras recorded the waters' reactions. Ford teachers also observed the reactions. 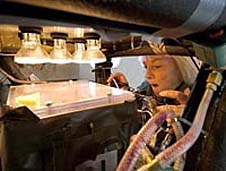 On the first flight, Ford teachers David Romanowski and Jennifer McCarthy had a problem. Things went well for the first five or six tries, Romanowski said. "Then we noticed a problem with the cameras. They had stopped taking pictures. ... Then the water stopped shooting out of the chamber. The pumps weren't working."

After landing, they found the problem: a loose washer. "When we opened up the electrical panel, we saw the tiniest little washer sitting under an electrical contact," Romanowski said. "We came to the conclusion that the washer caused a short circuit, like blowing a fuse."

On the second flight, the experiment worked well. Ford vice-principal Barbara Kelly and seventh-grade science teacher Andrea Ogles observed the experiment. They couldn't tell for sure if the water droplets merged or bounced when they collided. "But they did form almost bubble shapes, and they would float around and float to the top and pop just like a bubble," McCarthy said.

Also working as part of the Ford team were principal Claire Crane and teachers Paula Muller and Shannon Stevens.

The team told students about the experience using the school's Web site. They sent pictures and wrote a daily blog. They also answered students' questions using e-mail. "They saw every single day what it is we did," McCarthy said. "I felt when we came back, they were very well aware of what went on." 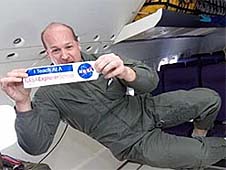 Students wanted to know what it was like to feel weightless in microgravity. Romanowski said swimming was the closest on-Earth activity to how he felt in microgravity. "But even then, when you're floating (in microgravity) you don't have the weight of the water," he said. "I loved it. It was fantastic."

McCarthy enjoyed experiencing nearly double Earth's gravity as much as she enjoyed microgravity. "It was amazing experiencing two-g's," McCarthy said. "You'd be standing up and all of the sudden it's like someone is pulling you down to the ground."