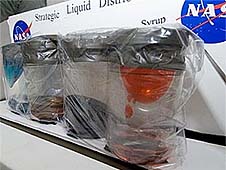 Students at Kilmer Elementary School wanted to know how liquids act in space. The experiment they built for NASA's reduced-gravity aircraft studied the effects of increased and reduced gravity on jars of liquids of varying densities, or thickness.

Shara Fata is a science teacher at Kilmer Elementary School. She helped the first- through sixth-grade students do the experiment in their classroom. They turned over each jar of liquid and then wrote about what they saw. They also wrote what they thought would happen in microgravity and increased gravity.

Fata and other teachers from Kilmer did the same experiment on the Weightless Wonder. The teachers saw that all of the liquids moved in some way. The less dense, or lighter, the liquid, the more it moved. The more dense, or heavier, liquids moved less. "It was amazing," Fata said. "When we mixed oil and water, the water -- which is less dense than the oil -- shot up and went right through the oil."

"We thought (the honey) would stick to the side," Fata said. "It hardly moved from the bottom. It was so heavy, even in a microgravity environment, it was so hard to move." 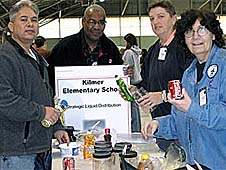 The other teachers who flew on the Weightless Wonder were Edwin Cotto, who works with Spanish-speaking students, and Carl Mason, who teaches music. Health teacher Kelli McCue was on the team, too.

Mason is making a music video about the project. He will use photos from the experiment and put them to music popular with his students. Cotto will translate the video into Spanish for Spanish-speaking students and parents.

Fata said the microgravity experience was amazing. "You actually do float," she said. "The slightest touch would send you across the plane. ... First you feel like a rock, and then you're just floating."

Mason said the flight was a unique and awesome experience. "Each minute was a new adventure," he said.