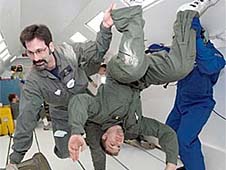 Mitch Rorris and Ryan Reinking float inside NASA's Weightless Wonder aircraft during one of many periods of reduced gravity. Image Credit: NASA

The Sioux City Community School District -- which includes Sioux City's North, East and West middle schools -- is one of 20 NASA Explorer Schools that designed an experiment that was conducted on a reduced-gravity flight. Teachers ran the experiments on NASA's "Weightless Wonder" aircraft. The aircraft flies in a roller-coaster-like path. When the plane climbs up, passengers can feel almost twice as heavy. Then the plane descends toward the Earth, letting passengers experience weightlessness. This process is repeated multiple times during the flight.

Sixth-grade students in Mitch Rorris' science class wanted to know how changes in the amount of gravity would affect convection, the flow of a liquid or gas. To find out, the students built an experiment.

Their experiment used two cylinders -- one heated and one cooled. A connecting tube near the bottom of the cylinders allowed air to flow between the cylinders. 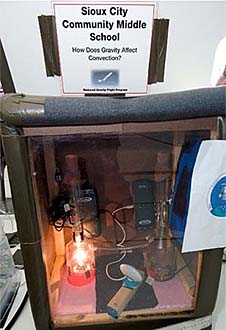 Rorris and other Sioux City teachers performed the same experiment on the Weightless Wonder. The experiment on the Weightless Wonder used dry ice, to make the air even colder, and a light bulb to produce heat. The teachers on the aircraft used computers to track air movement by measuring the temperature in the cylinders as the gravity on the plane changed. Students analyzed the data later.

"Sure enough," Rorris said, "there's an indication that that's pretty much what happened. It's only one test ... but it indicates that the kids were right."

Rorris said running the experiment in microgravity was exciting. "The experience gets me fired up," Rorris said. "It really gets me going again. When the kids see an instructor that's really into it, it spreads."

Rorris couldn't find the words to describe the unique experience. "When you go from two-g's to having that release in microgravity, it's just unbelievable," he said.