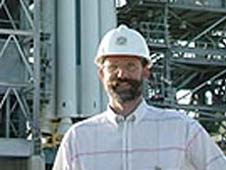 Phil Christensen stands in front of a Delta rocket three days before it would carry the Mars Odyssey spacecraft to space. Image Credit: Phil Christensen

Two things have fascinated Phil Christensen since he was young -- Mars and rocks. As a kid, he spent hours looking at Mars, along with other planets and the moon, through a telescope. Then, in high school, a book about the moon's geology sparked his interest in rocks and planetary surfaces.

Now a NASA scientist, Christensen combines his love for space science and geology. He studies the surfaces of Mars and Earth. He has helped build several NASA instruments launched into space. The instruments help scientists map the Martian surface and study the history of water on Mars.

Mars is of particular interest to scientists. Not only is the planet similar to Earth, but also it seems possible to go there, Christensen said. He believes a good chance exists that humans will go to Mars within the next 50 years. But until that happens, sending instruments there is crucial to learning more about Mars.

"That can tell us a lot about the planet, tell us what the environment is like and what humans have to be prepared for when they get there," he said.

Scientists already know that Mars has an atmosphere. Mars is farther from the sun than Earth, and thus colder. Temperatures near the planet's poles can drop as low as about minus 125 degrees Celsius (minus 195 degrees Fahrenheit). But temperatures can rise to as high as about 20 C (70 F) near the equator. This means that humans may some day go to Mars and experience temperatures similar to those found on Earth.

Also, like Earth, Mars has glaciers, dust storms, river channels and volcanoes. In fact, Mars is basically a volcanic planet. That means Mars has many different types of rocks made from cooled-down lava.

How similar are Martian rocks to those on Earth? To find out, Christensen started to collect different rocks from around the world. One day he was in Iceland to collect a sample, when he noticed a school right across the street. That gave him an idea to involve students in his exploration.

"It dawned on me that I could have written to the school and the students probably would've loved it if I'd said 'I'm a NASA scientist. Can you go across the street and collect a rock and mail it to me?'" he recalled.

That idea was the start of the Rock Around the World program. Students around the world have collected more than 8,000 rock samples and sent them in to be compared with Mars rocks. "It's gratifying to see kids get excited about Mars," Christensen said. "For some of these students, this may be the beginning of a career in Earth sciences." 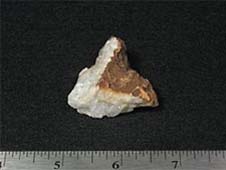 From Australia, this is one of more than 8,000 rocks sent in by students for the Rock Around the World program. Image Credit: Arizona State University

Christensen and other researchers analyze the rocks they receive with instruments called spectrometers. Spectrometers bounce waves of light off objects. Depending on what the object is made of, some of the light is absorbed and some isn't. By studying the new makeup of the reflected light, scientists can figure out what minerals are present in the rocks.

Analyzing a rock in a laboratory on Earth is one thing. But what about gathering similar information about rocks on Mars?

Christensen led the design and development of an instrument called THEMIS. The acronym stands for Thermal Emission Imaging System. THEMIS is a special camera attached to the Mars Odyssey spacecraft that launched in 2001.

THEMIS circles Mars every two hours, taking visible and infrared images of the planet and sending them back to Earth. Christensen and his colleagues decipher the images to understand the makeup of Martian rocks. They also use the data to find evidence of water on the planet.

When Christensen first gazed at Mars through his telescope more than 40 years ago, he never thought he'd be creating instruments to study the planet up close. Being a space scientist seemed out of reach when he was young, he said. But as he found out, if you love to do something and you are ready to work hard, you can be what you want.