Few people know cold and ice like Robert Bindschadler does. The longtime NASA scientist has led more than a dozen research trips to Antarctica. In doing so, he's had to sleep in tents through blizzards and bitter cold. He's also had to avoid falling into hidden cracks in ice. 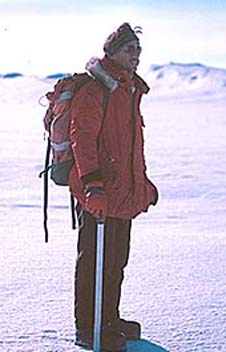 What's more, he enjoys it.

"A lot of people think we're crazy for what we do," Bindschadler said. "Actually, the camping is a lot of fun, and I know of no other place so remote where you feel so close to nature."

Bindschadler likes an adventure. But that's not the only reason he subjects himself to extreme environments. The study of ice is critical to predicting how Earth's climate will change in the future. Warming global temperatures are melting ice more quickly than scientists expected.

This decade has seen the breaking or collapse of three major ice shelves. Ice shelves are the parts of glaciers that extend out over the ocean. Glaciers are large rivers of ice on land that move very slowly downhill.

In 2002, the Larsen B Ice Shelf broke off the Antarctic Peninsula's eastern coast. It took just more than a month for a piece of ice the size of Rhode Island to disintegrate. Scientists estimate that Larsen B may have existed for 12,000 years before it disappeared.

Also in 2002, the Ward Hunt Ice Shelf, along the north coast of Canada's Ellesmere Island, split in two. Ward Hunt is the largest ice shelf in the Arctic. Three years later, in 2005, the nearby Ayles Ice Shelf separated from Ellesmere. The Ayles Ice Shelf is now an island of ice drifting in the Arctic Ocean that covers an area about the size of Manhattan.

Bindschadler seeks answers to important questions raised by a warming world: Where and how quickly will ice melt? How much and how fast will sea levels rise as a result? What will the impacts be on society, especially for coastal areas?

"We're getting closer to these answers. We know we’ll have less ice, but it'll be a few more years before we can predict the details," Bindschadler said.

The details are hard to predict, in part, because it's not as simple as equating less ice to higher sea level. Ice shelves are already floating in the water, so their melting doesn't cause sea level to rise. The same is true when an ice cube floating in a glass of water melts; the water level doesn't rise.

However, ice shelves do help to limit downhill movement of the glaciers to which they are attached. Thus, the loss of an ice shelf allows glacier ice to flow more quickly from land into the ocean. This effect does raise sea level, just like dropping an ice cube into a glass of water raises the height of the water. 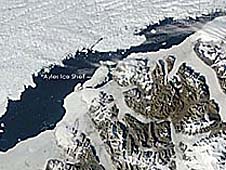 The MODIS instrument on NASA's Terra satellite captured this image of the Ayles Ice Shelf shortly after it separated from Canada's Ellesmere Island. Image Credit: NASA

Antarctica isn't the only place Bindschadler has visited in his quest to better understand ice. He has explored glaciers in Washington State, Alaska, Switzerland and New Zealand. He has also traveled to Iceland and to the edge of the Greenland ice sheet.

When he's had enough of the bone-chilling cold, Bindschadler warms up inside NASA’s Goddard Space Flight Center in Greenbelt, Md. At Goddard, he uses satellites to learn more about glaciers and ice shelves. Satellites can measure the movement of ice and changes in its area and thickness.

Why brave the cold and ice in person if satellites can do the job from space?

The answer is that ground observations are needed to check the accuracy of satellite measurements. Also, some tasks are impossible to accomplish from space. These include drilling into ice to measure its thickness or to study the bedrock below.

Bindschadler says that viewing ice from space and then from the ground is "a bit like seeing a fly with your eyes, wondering how it sees and flies, getting some ideas, but then having to look at it under a microscope to check out your ideas."

What's next for Bindschadler? He's planning to go to Antarctica's Pine Island Ice Shelf. He says it would be "the most dangerous place I've ever worked." The ice shelf has lots of crevasses -- deep cracks in the ice -- and little room to land an airplane or set up camp.

The risks would be worth the reward, according to Bindschadler. His team would melt a hole five inches in diameter through the 500-meter-thick ice shelf. Then, the team would drop down sensors to monitor the water below. The data collected could help scientists understand how heat is transferred from ocean waters to ice. This is an important factor in the melting of ice.

"When all is said and done, it is the scientific mysteries we are trying to solve that motivate me to make the trip and face the hazards," Bindschadler said.

Ice goes by different names depending on where and how it forms:

Glaciers are large rivers of ice on land that move very slowly downhill. They form in snowy places that are cold enough year round to limit melting. As snow accumulates over many years, it packs down into thick masses of ice.

Extremely large glaciers -- more than 50,000 square kilometers (19,500 square miles) -- are called ice sheets. Only two ice sheets currently exist. One covers nearly all of Antarctica, with the other covering most of Greenland.

Ice shelves are those parts of glaciers that extend out over the ocean.

Icebergs are large pieces of ice floating in the ocean that have broken off from a glacier or ice shelf.