Journey to a Star Rich With Planets 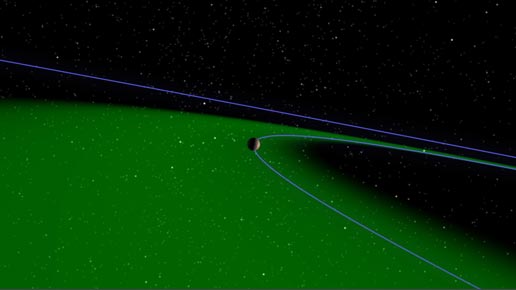 This artist's animation takes us on a journey to 55 Cancri, a star with a family of five known planets - the most planets discovered so far around a star besides our own.

The animation begins on Earth, with a view of the night sky and 55 Cancri (flashing dot), located 41 light-years away in the constellation Cancer. It then zooms through our solar system, passing our asteroids and planets, until finally arriving at the outskirts of 55 Cancri.

The first planet to appear is the farthest out from the star – a giant planet, probably made of gas, with a mass four times that of Jupiter. This planet orbits its star every 14 years, similar to Jupiter's 11.9-year orbit.

As the movie continues, the three inner planets are shown, the closest of which is about 10 to 13 times the mass of Earth with an orbital period of less than three days.

Zooming out, the animation highlights the newest member of the 55 Cancri family – a massive planet, likely made of gas, water and rock, about 45 times the mass of Earth and orbiting the star every 260 days. This planet is the fourth out from the star, and lies in the system's habitable zone (green). A habitable zone is the place around a star where liquid water would persist. Though the newest planet probably has a thick gaseous envelope, astronomers speculate that it could have one or more moons. In our own solar system, moons are common, so it seems likely that they also orbit planets in other solar systems. If such moons do exist, and if they are as large as Mars or Earth, astronomers speculate that they would retain atmospheres and surface liquid water that might make interesting environments for the development of life.

The animation ends with a comparison between 55 Cancri and our solar system.