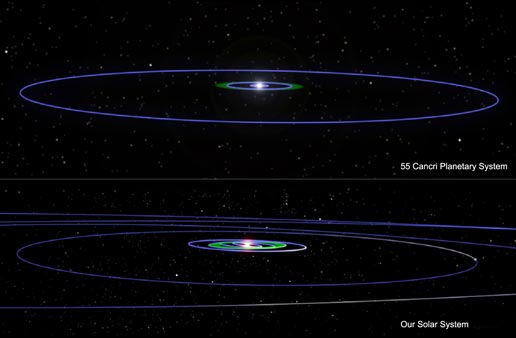 This artist's concept illustrates two planetary systems - 55 Cancri (top) and our own. Blue lines show the orbits of planets, including the dwarf planet Pluto in our solar system. The 55 Cancri system is currently the closest known analogue to our solar system, yet there are some fundamental differences.

The similarities begin with the stars themselves, which are about the same mass and age. Both stars also host big families of planets. Our solar system has eight planets, while 55 Cancri has five, making it the record-holder for having the most known exoplanets. In fact, 55 Cancri could have additional planets, possibly even rocky ones that are too small to be seen with current technologies. All of the planets in the two systems have nearly circular orbits.

In addition, both planetary systems have giant planets in their outer regions. The giant located far away from 55 Cancri is four times the mass of our Jupiter, and completes one orbit every 14 years at a distance of five times that between Earth and the sun (about 868 million kilometers or 539 million miles). Our Jupiter completes one orbit around the sun every 11.9 years, also at about five times the Earth-sun distance (778 million kilometers or 483 million miles). Fifty-five Cancri is still the only known star besides ours with a planet in a distant Jupiter-like orbit. Both systems also contain inner planets that are less massive than their outer planets.

The differences begin with the planets' masses. The planets orbiting 55 Cancri are all larger than Earth, and represent a "souped-up" version of our own solar system. In fact, this is the first star that boasts more giant planets than our sun!