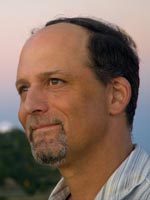 Geoff Marcy CUT 1
+ Video download (Quicktime - 44Mb)
+ Play audio
Length: 25 seconds
OUT: "ORBITING A SUNLIKE STAR"
Transcript: "We've been observing a sunlike star called 55 Cancri, it's star 55 in the constellation Cancer, for 19 years, and we watch the wobble of this star as it's yanked on by the planets orbiting it. And so far now we've found four planets, and we're just now announcing the discovery of the fifth planet, the first planetary system with five full planets orbiting a sunlike star."

Geoff Marcy CUT 2
+ Video download (Quicktime - 65Mb)
+ Play audio
Length: 35 seconds
OUT: "VENUS, MARS OR EARTH"
Transcript: "There is an intriguing, mysterious gap between the fourth planet out around 55 Cancri and the Jupiter-like planet that's far away. In that gap, we don't know what there is. Our current technology would be able to detect big planets like Neptune, Saturn and Jupiter. We don't see any of them. So if there are any planets there, they must be smaller, the size of the Earth. In fact, it's a little hard to imagine that there's just nothing there in this big gap. So the suggestion is there might be small rocky planets, like Venus, Mars or Earth." 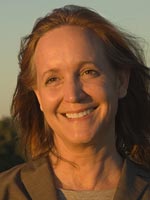 Debra Fischer CUT 1
+ Video download (38Mb)
Length: 19 seconds
OUT: "CALL THE HABITABLE ZONE"
Transcript: "This planet we think is likely to have a fairly substantial atmosphere. It's very massive. It might not be the sort of place that, at least life as we know it, would find to be a comfortable environment. However, this planet in fact orbits in what we call the habitable zone."

Debra Fischer CUT 2
+ Video download (Quicktime - 39Mb)
Length: 19 seconds
OUT: "CANDIDATES FOR EARTH-LIKE PLANETS."
Transcript: "So what we're doing right now with our observational technique, the Doppler technique, is taking really the very first steps to finding Earth-like planets. We're going to find, you know, we'll basically give NASA the addresses, the names and addresses, of the most likely candidates for Earth-like planets."