Wave of a Planet 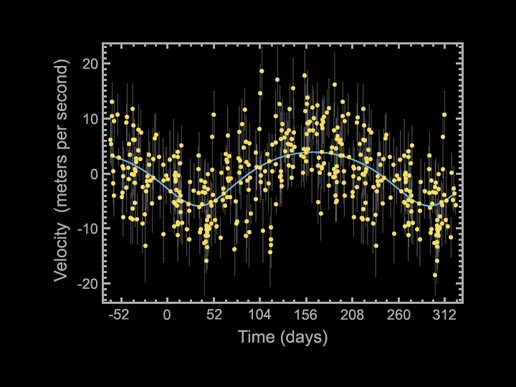 This plot tells astronomers that a fifth planet is in orbit around the star 55 Cancri, making the star the record-holder for hosting the most known exoplanets.

As planets circle around their stars, they cause the stars to wobble back and forth in a regular pattern. By looking for this motion in a star, scientists can find planets that can't be seen with telescopes.

The wobble caused by the fifth planet discovered around 55 Cancri is represented here by the sinuous line in blue. The actual data points are yellow and error bars are the lines above and below the yellow dots. The cycle of the wobble indicates that the planet circles around its star about every 260 days. The amplitude of the wobble indicates that the planet is a giant at least 45 times the mass of Earth.

The wobbles caused by the other four planets has been removed from this plot, to reveal that caused by the fifth. The departure from a perfect sine wave suggests the planet's orbit is not perfectly circular.

Because 55 Cancri has multiple planets, the star had to be observed for a long time before astronomers could find and confirm its fifth planet. These data were collected over a period of 18 years using both the Lick Observatory near San Jose, Calif., and the W.M. Keck Observatory in Hawaii.

Image credit: NASA/JPL-Caltech/SFSU
› Back To Top