Telltale Tug of a Planet 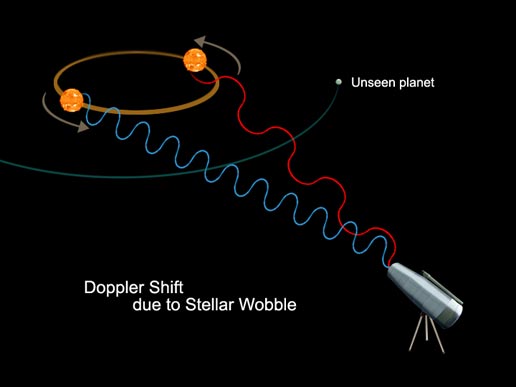 This artist's illustration demonstrates the "wobble," or radial velocity, technique for finding planets. This successful method has resulted in the discovery of most of the 250 or so planets, called exoplanets, known to exist beyond our solar system.

The planet-detection technique relies on the fact that stars wobble back and forth as their planets circle around, tugging on them like children. As a star moves toward us, the color of its light shifts to shorter, or bluer, wavelengths. As the star heads away, its light stretches into longer, or redder, wavelengths. The same principle, called the Doppler effect, causes sound from a speeding train to lower in pitch as it passes by.

By measuring changes in the wavelength of light from a star, astronomers can track changes in the star's velocity that arise from circling planets. By measuring the speed of the star and the period of the wobble, they can determine the mass and distance of the unseen planet, respectively.

When multiple planets are present around a star, the task of teasing apart the individual planet signals is more difficult. Computer programs and mathematical models aid this process, revealing even the tiniest of planetary tugs. For example, NASA-funded astronomers recently discovered a fifth planet in orbit around the star 55 Cancri, making this star the record-holder for hosting the most known exoplanets.