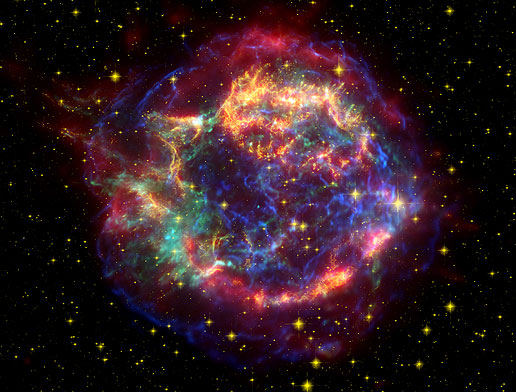 Image above: This false-color image from three of NASA's Great Observatories provides one example of a star that died in a fiery supernova blast. Called Cassiopeia A, this supernova remnant is located 10,000 light-years away in the constellation Cassiopeia. At the center of this orb, visible only as a tiny turquoise dot, is the leftover corpse of the now-dead star, called a neutron star. The multi-hued shell outside the neutron star is the rest of the original star's scattered remains.
+ High resolution image and full caption
Image credit: NASA/JPL-Caltech/Steward Observatory 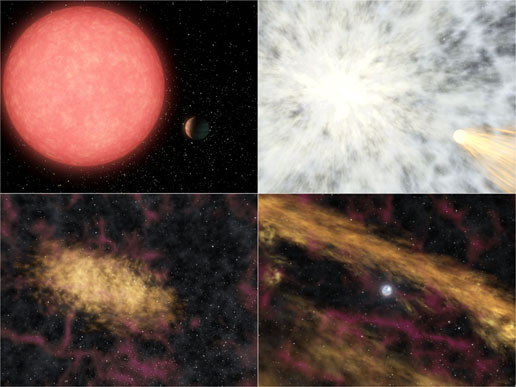 Image above: This artist's animation depicts the explosive death of a massive star, followed by the creation of a disk made up of the star's ashes. NASA's Spitzer Space Telescope was able to see the warm glow of such a dusty disk using its heat-seeking infrared vision. Astronomers believe planets might form in this dead star's disk, like the mythical Phoenix rising up out of the ashes.
+ Animation (6.5Mb)
+ High resolution animation and full caption
+ High resolution animation available in additional formats
Animation credit: NASA/JPL-Caltech 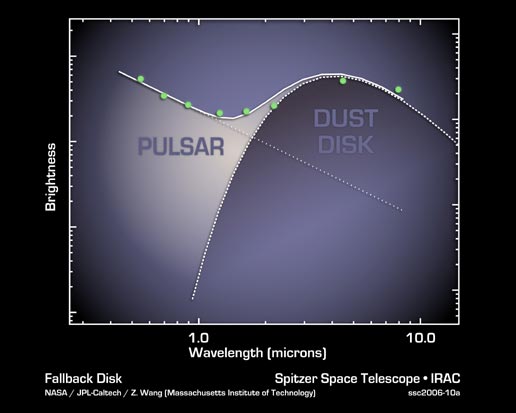 Image above: This plot tells astronomers that a pulsar, the remnant of a stellar explosion, is surrounded by a disk of its own ashes. The disk, revealed by the two data points at the far right from NASA's Spitzer Space Telescope, is the first ever found around a pulsar. Astronomers believe planets might rise up out of these stellar ashes.
+ High resolution image and full caption
Image credit: NASA/JPL-Caltech/MIT 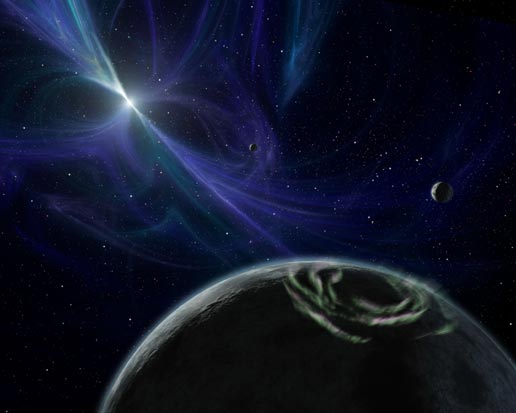 Image above: This artist's concept depicts the pulsar planet system discovered by Aleksander Wolszczan in 1992. Wolszczan used the Arecibo radio telescope in Puerto Rico to find three planets - the first of any kind ever found outside our solar system - circling a pulsar called PSR B1257+12. Pulsars are rapidly rotating neutron stars, which are the collapsed cores of exploded massive stars. They spin and pulse with radiation, much like a lighthouse beacon. Here, the pulsar's twisted magnetic fields are highlighted by the blue glow.
Image credit: NASA/JPL-Caltech
+ High resolution image and full caption

For more information about Spitzer visit the mission home page at http://www.spitzer.caltech.edu/spitzer/
› Back To Top