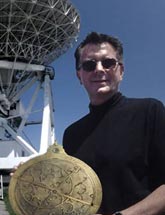 Dr. Aleksander Wolszczan is an astrophysicist whose research interests include astronomy of extrasolar planets, experimental gravitation, pulsars and astronomical instrumentation. His most significant achievements include the discoveries of pulsars in globular clusters and supernova remnants, and the detection and characterization of a binary pulsar, which has become one of the most precise probes of relativistic gravity. In 1992, he discovered three planets circling a pulsar, comprising the first known planetary system beyond our own. Wolszczan received a doctorate in physics in 1975 from the Nicolaus Copernicus University in Torun, Poland. He held positions at the Max-Planck-Institut fuer Radioastronomie in Bonn, Germany; the National Astronomy and Ionosphere Center operated by Cornell University, Ithaca, N.Y.; and Princeton University in Princeton, N.J. He is currently an Evan Pugh Professor of Astronomy and Astrophysics at the Pennsylvania State University and a professor at the Centre for Astronomy at the Nicolaus Copernicus University. His many awards include the Beatrice M. Tinsley Prize of the American Astronomical Society. Wolszczan is featured on one of the series of sixteen postage stamps issued in Poland in 2001 to commemorate the Polish Millennium.
› Back To Top