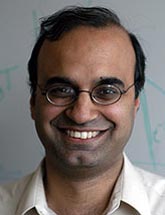 Dr. Deepto Chakrabarty is an associate professor of physics at the Massachusetts Institute of Technology in Cambridge, Mass., and a researcher at MIT's Kavli Institute for Astrophysics and Space Research. His research focuses on the physics and astrophysics of neutron stars, and the spin evolution of the fastest-spinning stars in the universe, known as millisecond pulsars. Chakrabarty received his undergraduate degree in physics from MIT in 1988, and his doctorate degree in physics in 1996 from the California Institute of Technology in Pasadena. He was recently awarded the 2006 Bruno Rossi Prize in high-energy astrophysics from the American Astronomical Society.
› Back To Top