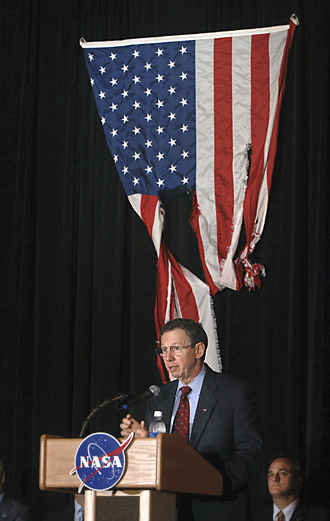 As Hurricane Katrina threatened the Gulf Coast last August, thousands heeded warnings to flee, but a group of workers at NASA’s Michoud Assembly Facility, east of New Orleans, chose to stay behind despite the danger. The ride-out crew was awarded the agency’s Exceptional Bravery Medal today for protecting the facility responsible for the space shuttle external fuel tanks and for saving the Space Shuttle Program from massive delays.

"Their courage reminds us that not all of NASA’s heroes fly in space," said NASA Administrator Michael Griffin who was at Michoud to present the awards to the crew’s 38 men and women.
+ View list of honorees
+ Read Griffin speech (PDF, 24 KB)

As the NASA and Lockheed Martin workers "hunkered down" in the early morning hours of Aug. 29, 2005, they weren't just waiting out the storm. They had volunteered to stay and protect valuable space flight hardware inside the facility. Their efforts were critical not only to NASA's Space Shuttle Program, but also to the future of human space flight. Michoud's unique manufacturing facilities figure prominently in America's Vision for Space Exploration, since derivatives of the external tank are part of the design for the next generation spacecraft.

Griffin visited the facility on Sept. 7 to see conditions first hand, and addressed NASA Employees the next day. "You can't buy the kind of dedication that I saw down there from our folks for any amount of money," he said. "It is not about salary or about holding a job. It is about dedication to the [space shuttle] program."

Michoud is near the spot where Katrina's eye made landfall. Though hurricane winds exceeded 130 mph and waves topped the levee height of 19 feet, the crew braved the conditions to work a critical pumping station. They were able to pump more than one billion gallons of water out of the facility, which kept external tank production downtime to a minimum and prevented significant delays in the shuttle program. 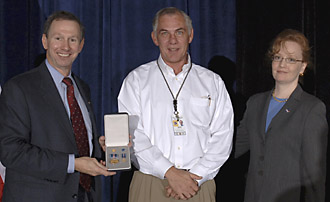 Several buildings on the 832-acre site suffered window and roof damage, but only one fuel tank was damaged when a concrete roof panel fell and bounced off the side of the tank.

“The ride-out crew risked their lives to save the facility, and many of them lost everything they owned outside our gates,” said NASA’s Patrick Scheuermann, the chief operating officer at Michoud who was awarded an Outstanding Leadership Medal for coordinating the crew's efforts.

Many team members "didn’t even know the fate of their own families until days after the storm passed,” said Stephen Turner, one of the honorees whose own home was severely damaged in the storm. “The crew worked through many weeks of hard, recovery work under very tough conditions. I am very proud to have served with this brave team and of what Michoud means to this community.”

After Hurricane Katrina passed -- with no injuries to employees -- land routes were cut off and electricity and water were nonexistent for 21 days.

Facilities were brought back online quickly, but a more pressing concern was finding temporary housing for workers -- 94 percent of whom reported damaged or destroyed homes. Short-term housing was provided to employees while they worked to restore the facility, bringing it back on-line to accept two tanks scheduled for shipment from NASA's Kennedy Space Center in Florida. The tanks were returned for redesign work. 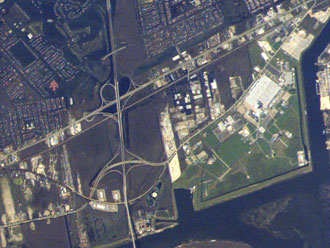 Nine weeks after the hurricane, Michoud returned to full operations. Most of its 2,000 employees -- 600 of whom lost their homes in the storm -- have returned to work.

Now Michoud employees can once more focus on their work -- getting external tanks ready to fly for the next space shuttle launch.
› Back To Top