Grow Text SizeShrink Text Size
Virtual Education
From inside the virtual world of Second Life, NASA's Learning Technologies Project is reaching out to students and teachers. Second Life is a free, three-dimensional, online community where users can socialize and build custom worlds.

Second Life residents can mingle with scientists from NASA's Jet Propulsion Laboratory on Explorer Island, explore the surface of the moon on Lunar Exploration Island and teleport to e-Education Island for free educational resources (and a free virtual NASA mug and t-shirt). Avatars can visit an interactive planetarium with real-time showings of constellations and see a model of the Martian surface that was created using actual NASA data. 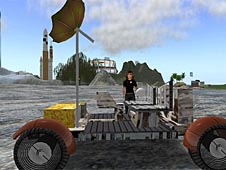 NASA's presence in Second Life is just one of several ways the agency's Learning Technologies Project is using cutting-edge technology to help meet NASA's education goals. These goals include attracting and retaining students in science, technology, engineering and mathematics, or STEM, disciplines; strengthening NASA's and the nation's future workforce; and engaging Americans in NASA missions.

NASA Learning Technologies is part of the agency's Education Technology and Products Program, which uses fresh, new technologies to provide NASA content to students and educators. Over the years, NASA Learning Technologies has helped with the research and development of many Web-based tools to present STEM content and now is using interactive environments, virtual worlds and immersive technology. Learning Technologies' current focus is guided by the "NASA eEducation Roadmap: Research Challenges in the Design of Persistent Immersive Synthetic Environments for Education & Training." Written in 2007, the roadmap is a research and development plan for the use of online virtual worlds in education.

One of the highlights of NASA in Second Life is the ability to watch live space shuttle launches. Screens at the islands' outdoor meeting spaces can show NASA video clips or stream live NASA TV. During shuttle launches and landings, Second Life users from around the world gather and watch together.

"A lot of what we do in Second Life is interactions with people," said Daniel Laughlin, a Learning Technologies project manager. "People get a big thrill out of being able to be a part of launches and landings, both with other people and people from inside NASA."

Laughlin added that the virtual experience can feel the same emotionally -- as if the individual is actually there. "It simulates live human interaction," he said.

As it relates to education, Laughlin said anything you can do face to face for education, you can do in Second Life and extend your reach. "If you've got a virtual Educator Resource Center, then an ERC is as close as your computer."

Learning Technologies not only runs e-Education Island, but the team also helps other NASA projects add education and outreach components to their areas in Second Life. These areas include JPL's Explorer Island; Lunar Exploration Island, managed by the Lunar Reconnaissance Orbiter and the Lunar CRater Observation and Sensing Satellite missions; the Classroom of the Future's Lunar World; and a student island on the Second Life teen grid, exclusively for 13- to 18-year-olds in NASA's INSPIRE project. INSPIRE stands for Interdisciplinary National Science Program Incorporating Research and Education Experience. 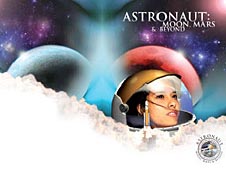 In addition to its work in Second Life, the Learning Technologies team is developing a massively multi-player, online role-playing game for students. The game is called Astronaut: Moon, Mars & Beyond.

Slated for release next year, the game will enable participants to learn and be tested on relevant skills through single-player and team-based missions based on real NASA technologies. Players will interact with NASA digital assets, such as hyper-realistic digital renderings of Mars rovers and telescope images taken of and from space.

The level at which users participate in these missions will depend on age and education, among other factors. While the game has the potential to have a big impact on higher education, students as young as 13 can participate at a level suited to their experience.

The goal of the game is to use an environment where most kids already have experience to expose them to concepts and ideas in STEM. The biggest difference in someone who goes into STEM and someone who doesn't, Laughlin said, is exposure.

"It will expose a lot of young people to the potential career opportunities in science and engineering and open up their minds to career paths that they might not otherwise consider," Laughlin said. "And, it will do it through a medium they are very comfortable with -- the Internet and online gaming."

Today's students are spending a lot of time playing games. The goal of the Astronaut: Moon, Mars, and Beyond game will be to capture some of that time during which students will experience a fun and positive interaction with NASA-based STEM content.

The massively multi-player, online role-playing game, or MMO RPG, format was chosen because of the prolonged interaction with the game, with other players and with the content, Laughlin said. Also, with this format the game can be dynamically updated and customized to add more elements to the areas players use most.

"Most of all, we want to build a fun game so that people want to go home and play the NASA game," Laughlin said. "This game will be fun and challenging, and it will help you learn. ... If there's one thing we've learned from more than 800 pages of public input, it's that this game must be fun if it's going to be of any use for education."