Society depends on the balance in distribution of Earth's water. Too little, and life can come to a halt. Too much in the form of storms and floods can cause chaos. 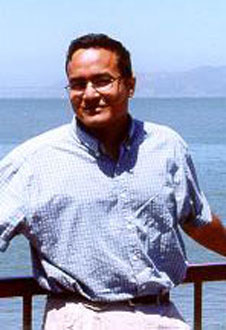 
View Larger Image   →
Faisal Hossain, a civil and environmental engineering professor at Tennessee Technological University, understands this all too well. In his home country of Bangladesh, flash floods destroy homes and crops every year. The country is prone to flooding because it sits on the Ganges delta. Melting glaciers due to changing climate are also a threat -- half the country would be submerged if sea levels rose by one meter.

Hossain uses NASA satellite data to help Bangladeshi authorities monitor their water resources and prepare for water-related disasters. With the help of NASA grants, Hossain's research group -- Sustainability, Satellites, Water and Environment -- also studies how human activities affect parts of the global water cycle. In December 2009, Hossain used satellite data to show that dams in arid and semi-arid regions of the world have created heavier storms with more rainfall, which have increased the possibility of flooding. "We are looking for ways to translate the applications of these satellites to societal benefits," Hossain said.

Hossain and his colleagues in the SASWE group take their education mission seriously. In April, they were awarded an education excellence award by the National Association of Environment Professionals.

The SASWE researchers have developed software tools for teaching college students the satellite techniques used in hydrology. And they regularly visit middle schools and high schools in rural Tennessee to share their enthusiasm with students about hydrology and management of water resources. "We want to inspire the future generation of Earth scientists to pursue a career in one of the science, technology, engineering and math fields," Hossain said.

As part of their education mission, the group plans to host and train staff members from the Institute of Water Modeling in Bangladesh. Right now, an IWM staff member is pursuing a master's degree focusing on understanding how to use satellites for real-time flood forecasting.

Countries besides Bangladesh that face water management challenges also could benefit from Hossain's research. Many developing nations in Asia, Africa and South America have strong wet and dry seasons. They depend heavily on rainfall and rivers for fresh water, but they do not have the necessary instruments and trained personnel to predict water shortages or overflowing riverbanks.

Politics further complicates matters, Hossain points out. For instance, five different countries share the Niger River basin in Africa. Rivers such as the Ganges and the Mekong originate in one country but cross several boundaries. "Downstream countries wouldn't know what kind of rainfall the upstream countries are getting," Hossain said. "If you could know the rainfall in upstream countries ... you could put the data in a (computer) hydrologic model that could predict for the next couple of days what the river level might look like." 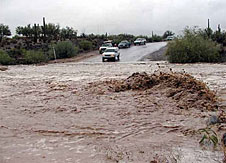 Satellite data can help predict flash floods like this one in Arizona. Image Credit: NASA


View Larger Image   →
Satellites are the easiest, most cost-effective way to measure rainfall and water movement, Hossain said. Instead of having hundreds of instruments on the ground, a single satellite circling hundreds of kilometers above Earth can look at large areas. It can provide data on how much rain falls in an area, how much water is in a river and how fast is it flowing downstream. Researchers can use this information to anticipate whether drought or flood conditions are a threat.

The Tropical Rainfall Measurement Mission run by NASA and the Japanese Aerospace Exploration Agency was the first satellite dedicated to rainfall measurement. It gave rainfall maps of the tropical regions near the equator, which get two-thirds of the world's total rain.

NASA and JAXA are now planning a new satellite mission for 2013 called the Global Precipitation Measurement mission. It will cover over 80 percent of the globe and, unlike the TRMM satellite, be able to measure light rainfall. In 2016, NASA plans to launch another hydrology satellite mission, called Surface Water and Ocean Topography, in partnership with the French space agency. The SWOT satellite will repeatedly measure the height of water in rivers, lakes and wetlands, which researchers can use to gauge the volume and flow of water in those bodies.

Hossain's group is now trying to identify which countries could most benefit from the Global Precipitation Measurement and SWOT missions. Their plan is to take data from both satellites and use it in sophisticated computer models to help these countries improve hydrological forecasts and better manage their freshwater supply.

Bangladeshi authorities today can predict flooding only up to three days ahead of time, and often with low accuracy. "This is where GPM could really make an impact," Hossain said. "We'd be able to forecast on a much longer time scale. I'm pretty confident we could do up to 10 days in advance, and that would be a big improvement."


Prachi Patel, Institute for Global Environmental Strategies
› Back To Top